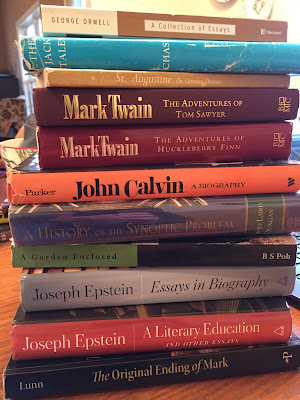 Time for end of year reading highlights.  This year I discovered LibriVox so I also listened to quite a few audio books, which I’ve also included.

Here is a list of ten enjoyable 2016 reads, in no particular order:

1.    B. S. Poh, A Garden Enclosed:  A historical study of the form of church government practiced by the Particular Baptists in the 17th and 18th centuries (Good News Enterprise, 2013): 330 pp.

I picked up a copy of this book while in Malaysia in 2015.  It is a scholarly study of early Particular Baptist ecclesiology that argues for the Independency model.  I wrote a review for the RBT and have an extended article version of the review coming out in the Puritan Reformed Journal (January, 2017).

I finished up reading this classic Scottish work of devotion and doctrine early in the year. One of the fruits of reading and study was an abridgement of a portion of the work as a tract on assurance, Am I Really A Christian?

I found Parker’s work on Calvin to be very stimulating.  Parker is one of the rare scholars who has studied Calvin as a text critic. Reading this work also led me to read portions of his books on Calvin’s NT commentaries and on Calvin as a preacher.  These were all helpful in doing the paper at Houston Baptist University in February 2016 on “John Calvin and Text Criticism.”  An article version of this paper will appear in Puritan Reformed Journal (July, 2017).

4.     David Laird Dungan, A History of the Synoptic Problem:  The Canon, the Text, the Composition, and the Interpretation of the Gospels (Doubleday, 1999): 526 pp.

Finally got around to reading this work this year.  Dungan is an advocate for Matthean priority.  Of note here is how he connects the rise of the theory of Markan priority with the corresponding rise of modern text and canon criticism.  This has become a new area of interest for me.

Epstein is my favorite essayists.  If you get started reading his essays, they are hard to put down.  Once you finish one, you want to read the next.  Both learned and accessible.  Dry, hilarious, skewering political correctness.  I got into reading a lot of essays this year (see later items in the list).  I am learning how to be a better reader, writer, and clearer communicator by reading Epstein.

In these essays, Orwell discusses everything from British imperialism to literary criticism (Dickens, Kipling, etc.) to writing.  What can a Christian learn from reading a secular socialist?  See my blog post.  I was inspired to re-read Animal Farm and have 1984 on my hope-to-re-read list for 2017.

I grew up hearing “Jack Tales” as bedtime stories on visits with my grandmother in Western North Carolina.  We read this book aloud after supper and family devotions this year, and my younger boys were enthralled.

I made a lot of references to this work in my 2016 Word Magazine podcasts (maybe to the point of overkill?).  This scholarly work offers the best and most recent defense of the traditional ending of Mark.  It should be read by any pastor who is planning to preach through the second Gospel before he handles the ending.

I read or listened to a lot more fiction than usual this year.  Re-connecting to my inner English major.  I listened to Twain’s classic works via LibriVox, after reading them years ago.  My adult ear picked up on Twain’s antipathy not only towards Christianity, in general, but against Calvinism, in particular.  Twain’s depiction of the “King” and the “Duke” duping the naive frontier revival crowd in Huckleberry Finn is particularly vicious.  Also struck by the novels’ moral ambiguity.  Tom is more of a jerk than a loveable scamp.  I gained more admiration, however, for the moral development of Huck.  Also intrigued by the question, still debated, of Twain’s views on race and slavery.

For reading reviews from past years, look here: