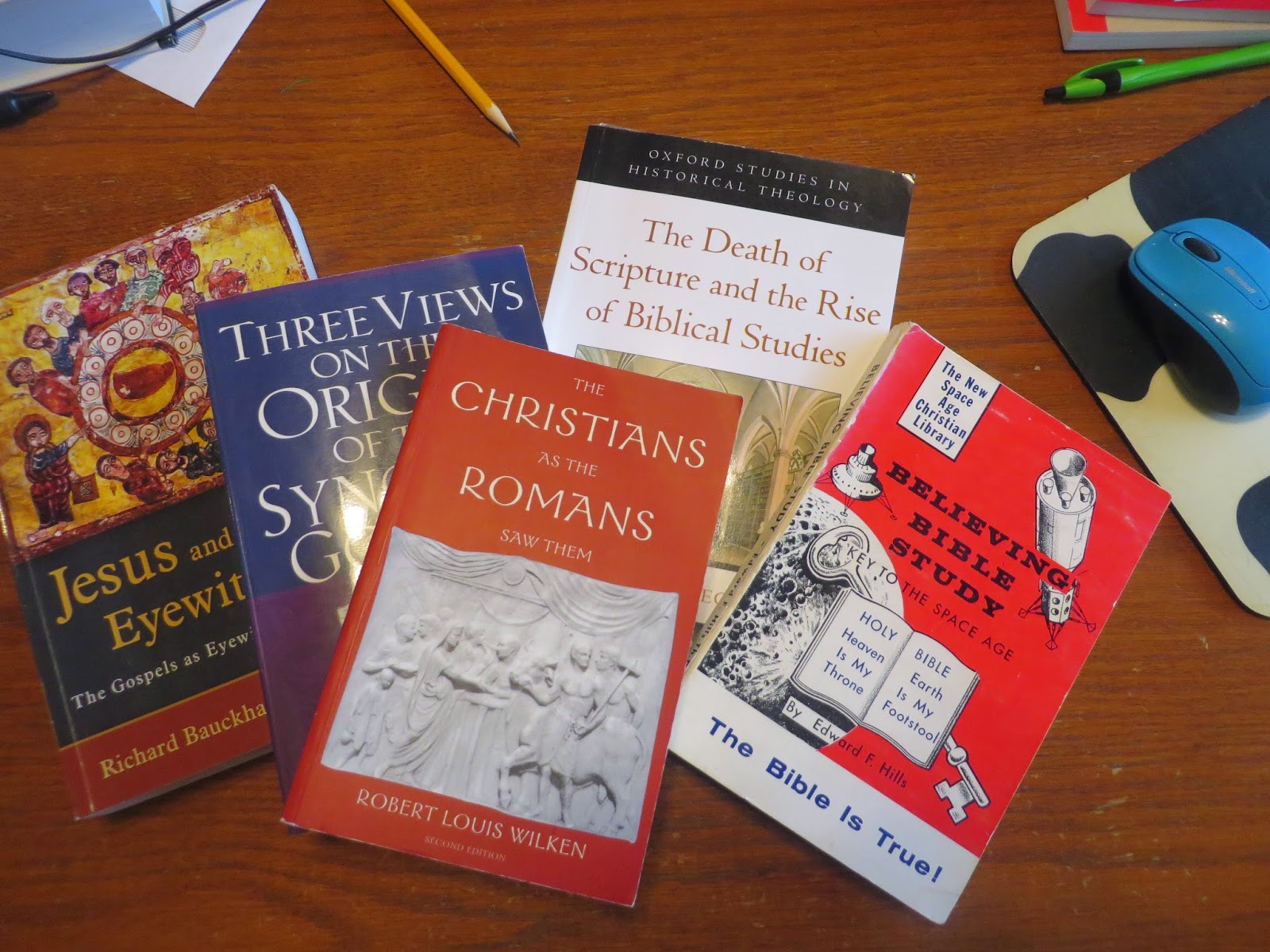 It is time once again for some reflection on my reading over the course of the past year.  I used to call this the “Top Ten Books” of the year but changed the title last year to “Reading Highlights” so as not to bring any confusion as to whether my review was of books published in the past year—it is not.  Rather, it is a list of ten books (and others) that I personally read and profited from over the past year.  For past reflections look here:  2008, 2009, 2010, 2011, 2012, and 2013.  Of course, these works were not the only things read last year.  There were also many other things read, skimmed, or consulted, whether a chapter here or there, an article, a blog post, a few pages reviewed,  or book started (that won’t show up till next year’s list). Here are ten books I particularly enjoyed reading in 2014 (though in no particular order):

I used this book as an assigned reading in a NT class I taught last year.  It provides a classic review and analysis of how pagan leaders, philosophers, and thinkers (like Pliny, Galen, Celsus, Porphyry, Julian) viewed, critiqued, and resisted the beliefs and practices of early Christians.  The stunning thing is the parallels to many modern anti-Christian sentiments.  There is nothing new under the sun.

I finally got around to reading this classic biography of Augustine.  I was interested in getting some background for understanding Augustine’s views on the text of Scripture but found much more in this book.  Though a respected academic work it also provides devotional dividends.

This is another work I assigned in a NT class last year.  The last few years I have picked up a side interest in the so-called “Synoptic Problem,” fueled, in part, by the task of teaching introduction to the NT each semester and the simultaneous privilege of preaching through the Gospel of Luke at CRBC.   This book is a symposium where advocates of three positions present their views and respond to their counterparts.  The three views:  Markan Priority [four source hypothesis], the reigning view in mainstream academic NT studies; Two Gospel Hypothesis [Matthean Priority], a view revived in recent years by William Farmer and others; and the Independence View, the traditional, pre-critical understanding that each Gospel developed independently without literary dependence upon the other Gospels (the view held by the Editor).  Unsurprisingly I have been drawn to advocacy for the Independence View.
4.    Paul Johnson, Intellectuals (Harper & Row, 1988):  385 pp.

I recently discovered the writings of Paul Johnson, the conservative, Roman Catholic historian and biographer.  This work provides a series of biographical sketches of modern intellectuals (including Rousseau, Marx, Tolstoy, Sartre, Hemingway, and others) who cast off the constraints of traditional thinking and Christian-influenced morality.  The main point:  Those who live in the realm of high, progressive ideals prove to be ethically inconsistent and hypocritical in their personal lives.
5.  Ayaan Hirshi Ali, Infidel (Free Press, 2007):  353 pp.

I picked up a total fascination this year with the life and writings of Ayaan Hirshi Ali.  I first read Infidel, Ali’s memoir of her life, from her birth in Somalia, to her flight as a refugee to Saudi Arabia and Kenya and her eventual immigration to Holland, where she became a controversial member of the Dutch Parliament.  It is also about her rejection of Islam.  Sadly, she has now embraced atheism.  If only, someone had (would) provide her a winsome witness for Christianity.  I then moved on to read her follow-up memoir, Nomad:  From Islam to America:  A Personal Journey Through a Clash of Civilizations (Free Press, 2010), which is equally gripping.  I passed these books on to my wife and oldest daughter and they both gave them thumbs ups.

This brief (yet dense) little booklet provides an introduction to the most recent edition of the modern-critical Greek text of the NT:  the Nestle-Aland 28th edition.  I also got my copy of the NA 28th last year and have begun to work through and make use of it.
7.  Bruce Manning Metzger, Reminiscences of an Octogenarian (Hendrickson, 1997):  242 pp.

I have been revisiting the influential academic works of Bruce Metzger on text criticism and English Bible translation and was helped by reading Metzger’s autobiography.  For my audio biography of Metzger, which drew heavily on this work, look here.

This book offers a sometimes technical take on the life and work of the German Old Testament scholar Johann David Michaelis (1717-1791) as a jumping off point for analyzing how the rise of Enlightenment influenced academic Biblical studies undermined the confessional authority of the Bible for the church.
9.  Richard Bauckham, Jesus and the Eyewitnesses: The Gospels as Eyewitness Testimony (Eerdmans, 2006):  538 pp.

I really enjoyed Bauckham’s challenge to form-critical readings of the Gospels and his defense of traditional views that the Gospels were based on eyewitness testimonies.  The reader should beware, however, since Bauckham rejects other traditional views relating to authorship, historicity, etc.

Hills was a voice crying in the wilderness in his opposition to the rise of the modern critical text of the Bible and his advocacy for the traditional text of Scripture based on Reformed, confessional principles.  In this book he relates the issue of text to science, philosophy, and the rise of evolutionary thought, as well. Hills is better known for his work The King James Version Defended, but I think this work actually offers a more compelling case for the traditional text.  Alongside this book I also read Theodore P. Letis, Edward Freer Hills’s Contribution to the Revival of the Ecclesiastical Text (The Institute for Renaissance and Reformation Biblical Studies, 1987):  177 pp.

Here are some other notable works read or re-read in 2014:

A very good book, that I bought recently and I'm still reading is "The Jesus Quest: The Danger from Within", organized by Norman Geisler and David Farnell;It's a massive book, that faces some questions involving the leaving of many evangelical scholars from the conservative perspectives concerning the Person of Christ and the traditional view on inerrancy. A very Good book and a important alert to the church.
God Bless!

Thanks for pointing this work out. Maybe it will show up on next year's list.

Yes, there are dangers and inconsistencies for evangelicals who attempt to use modern historical methods in the "search for the historical Jesus," etc. The content of this book looks similar to 1998's "The Jesus Crisis" which Farnell co-edited with Robert L. Thomas.

One (of several) problems with Geisler, however, is his insistence on inerrancy apart from a confessional view of Scripture (claiming inerrancy for the elusive autographa but neglecting the providential preservation of the apographa).

I agree with you Jeff, in my opinion, Geisler's books on inerrancy are very good, but his lack in uphold a confessional doctrine concerning the providential preservation of the Scripture it's nonsense. In fact, it's strange to see Geisler, Thomas and Farnell uphold the Critical Text.

But there's a chapter in The Jesus Quest that deals with the Fundamentalist-modernist controversy,and a little section that talks about lower criticism, Thomas Howe indirectly connects the LC with the liberal theologians.

I recommend this book enthusiastically.

I thought Johnson's book, The Intellectuals was a facinating read. Our culture holds many of these men in high esteem but seeing the inconsistency of their unordered lives including the cruel way they often treated others should remind us of the failure of 'worldly wisdom' and the skepticism with which we should view their philosophical conclusions.

Thanks for the comment. I agree. Johnson's brief biographical sketches are really engaging and consistently show how these various left-leaning social idealists failed to live out their beliefs in practice in their personal lives. As I understand it, however, Johnson has also come under criticism for hypocrisy on this score, so maybe it is more of a human problem rather than merely a leftist problem.