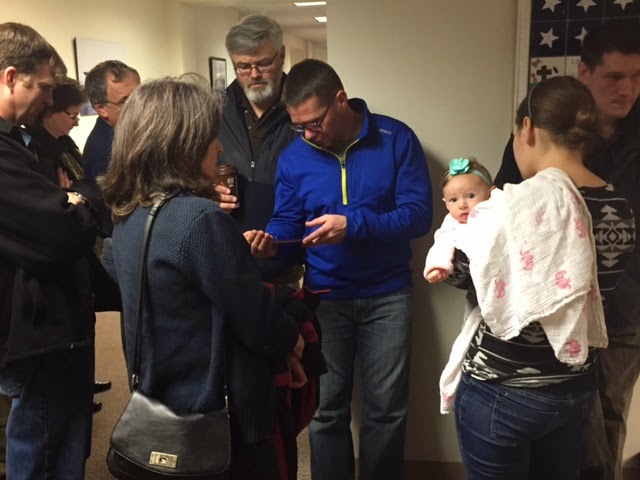 Image:  This picture appeared in the email sent out by The Family Foundation of Virginia concerning the Goochland meeting.  A small group listens to a livestream of the meeting from CRBC's Doug G.'s phone out in the overflow hallway.

Note:  This article appeared as a prayer update in the 1.15.15 Vision:

There was an incredible outpouring of visible support for the Pruiett family and opposition to policy change on religious exemption homeschooling at the Goochland County School Board Meeting on Tuesday evening (1.13.15). A number of CRBCers were present and Brian O. and Michelle B. represented us well by speaking during the session.  As a result the board voted to amend the policy.   You can read about the outcome in this Fox News article and in this Richmond Times-Dispatch article.

Here also is a note that Doug Pruiett sent out the day after the meeting:

FIRST, to those of you who came to the meeting in support, THANK YOU for being used of God.  Those who could not come but who were praying for us, it was evident that God was moving through your prayers.  God bless all.
The meeting was standing room only in the main board room, three overflow rooms filled, and the hallway full of people, hundreds in attendance.  There were thirty people who spoke, only two of which were for the policy.  Those two people showed open hostility to home schoolers and religious people and were not very gracious.  The remaining speakers ALL had powerful points, just amazingly powerful as God clearly moved.
After three hours of public comments, the board voted 4-1 to repeal the offensive policy and replace with a very simple one (that was acceptable to the crowd).  The new policy removes the need for child affidavits, no mention of application, no renewals, no interviews, just a statement from the parents saying on behalf of themselves and their children, they attest to the religious training being done.
It was amazing how God brought people from near (many) and far to this meeting.  Just an absolute blessing.  HSLDA, HEAV, the Family Foundation, and other home school organizations were there.  Lawyers, mothers, fathers, young adults, children, all spoke.  Also, to add frosting, they voted to suspend enforcement action on current folks like us until the “second reading.”  The singular motion to repeal and replace must go to a “second reading” and before the whole crowd we got the board members to vow that they would vote the same way on the second reading.  HSLDA may provide some input on slight tweaks to the new policy.
There were TV cameras rolling from a couple stations.
God absolutely amazed us through this process, local news coverage, national news coverage, hundreds of people coming out, anointed speakers, and touched hearts on the board.  To GOD alone be the glory forever!
Safely in Jesus,