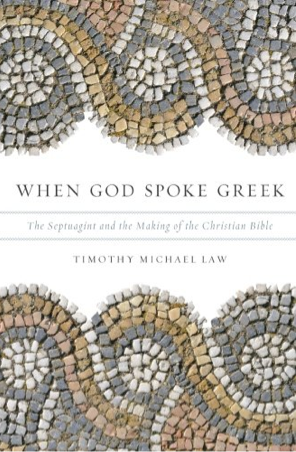 This week I’ve been reading Timothy Michael Law’s When God Spoke Greek:  The Septuagint and the Making of the Christian Bible (Oxford Press, 2013).

In this work, Law makes reference to numerous text and translation issues relating to various Scriptural passages.  In general, he wants to challenge the privileged place of the Hebrew Masoretic text of the Old Testament in the Christian tradition and to argue for the validity of the LXX.

One interesting passage he discusses is Psalm 8:5.  Law notes:

The Greek translator makes a theological decision that will later impact Christian interpretation, using “angels” instead of “God” in verse 6 (verse 6 in the Septuagint).  The Hebrew Bible, speaking of human beings, reads:  “Yet you have made them a little lower than God . . .”  The Septuagint translator was perhaps bothered by the suggestion that human beings were only “a little lower” than God, so he changed the passage to read:  “You diminished him a little in comparison with the angels” (pp. 55-56).

Though the passage was well known to me, I was not fully aware of the text and translation issues within it.

A quick check of the text does indeed reveal that the Hebrew MT reads elohim, which is typically translated in the OT as “God,” though the form is technically a masculine plural, so it might be rendered “gods” or perhaps even “heavenly beings.”

The LXX does indeed read angeloi or “angels.”  The LXX is also clearly the version cited in the only NT passage—Hebrews 2:7— where the OT passage is directly quoted.

The King James Version, which normally follows the Hebrew MT, does not render elohim as “God” but as “angels.”  Compare:

KJV Psalm 8:5 For thou hast made him a little lower than the angels, and hast crowned him with glory and honour.

What are we to make of this decision?  Did the KJV translators here act like many modern OT editors and translators and choose to follow the LXX rather than the Hebrew?

Such a choice was not unanimous among the Reformation era translations.  The Geneva Bible sticks with the Hebrew:

Geneva Bible Psalm 8:5:  For thou has made him a little lower than God, and crowned him with glory and worship.

Note its use of Isten (God) rather than angyalok (angels).

The question one might pose is why the KJV translators who are usually so careful to follow the Hebrew original seemingly depart from it here.

The NASB follows the Hebrew Masoretic text in translating “God”:

NASB Psalm 8:5 Yet Thou hast made him a little lower than God, And dost crown him with glory and majesty!

The NKJV follows the KJV’s lead in translating “angels”:

NKJV Psalm 8:5 For You have made him a little lower than the angels, And You have crowned him with glory and honor.

The NIV departs from both by translating “heavenly beings”:

NIV Psalm 8:5 You made him a little lower than the heavenly beings and crowned him with glory and honor.

The ESV follows the same route as the NIV by using “heavenly beings”:

ESV Psalm 8:5  Yet you have made him a little lower than the heavenly beings and crowned him with glory and honor.

The ESV also adds a note explaining:  “Psalm 8:5 Or than God; Septuagint than the angels.”

Back to the KJV translation choice:

I think the KJV translation choice at Psalm 8:5 can be understood as an attempt to produce an ecclesiastical translation which harmonizes the OT passage with its NT citation of this verse at Hebrews 2:7, which in Greek reads angeloi and is rendered in English as “angels.”

The KJV (and the NKJV which follows it) is the only translation that harmonizes the two passages (Psalm 8:5 and Hebrews 2:7) by making the reference identical.  Again, this would be a place where one might say that the KJV is driven more by an ecclesiastical concern than a purely academic one.  The point is not that the KJV translators were following the Septuagint at Psalm 8:5 but that they were following the Greek of Hebrews 2:7.  That is, they were guiding the reader to naturally understand the harmony between Psalm 8:5 and Hebrews 2:7 as part of the harmony of the Christian Scripture.

I have been reading this book also. It is a helpful insight since many of the early Christians recieved their Old Testament from the Septuagint until Jerome. I appreciate you pointing out this variant. Most of the New Testament quotations match up with the Septuagint, and I think the KJV translators were privy to that.