Henderson Hills BC of Edmond, OK was set to vote over the weekend on removing the requirement of immersion baptism for church membership. See the BP article. The Elders in this SBC church did generate a lot of theological/exegetical work on the subject. See the HHBC baptism documents. This proposal has met with opposition from their fellow SBCers in OK. See Pastor Rick Thompson's reponse in the Baptist Messenger. See also the satirical piece by Jeff Young on "Mr. and Mrs. Sprinkled Prospect." HHBC has obviously been influenced by John Piper who has made a similar proposal, now in in limbo, to his church. See my audio response to Piper. HHBC also seems influenced by Wayne Grudem and they hold a non-cessationist position on charismatic gifts (see the position paper from their elders).
All the points I made to Piper apply here. How can we separate the requirement of Biblical (for believers and by immersion) baptism from church membership?
JTR
Posted by Jeffrey T. Riddle at 5:47 PM No comments:

Oh be careful little mouth what you say... in church!

Last weekend I was at my sister’s wedding in North Carolina. On Sunday morning my family set out to find a place to worship—something we rarely do apart from our beloved JPBC. We turned into a Baptist church off the main road near our hotel in an affluent suburban area near Charlotte. We attended the third of three morning worship service in the "worship center" which also doubles as a gym. According to the bulletin the church has c. 450 in Sunday School and c. 700 in its combined worship services. There were lots of well dressed young adults and families present. The third service was supposed to be the "traditional" one, which meant there was a choir and we sang two hymns along with the praise songs that were projected on the screen. The church children (not ours) abruptly left the service about midway through. The Pastor had a shaved head and wore a sleeveless sport shirt. The guest speaker, a former athlete who now has an evangelism ministry, was also dressed casually and had a shaved head. He was speaking in the morning and then doing evangelism training in the evening. The message was topical. I did appreciate this brother’s zeal for evangelism and his challenge to the worshippers to be more evangelistic.
What struck me were the conversations we heard before and after the service. First, no one spoke to us or greeted us or asked who we were. On one hand the anonymity was nice. On the other hand, my guess is no one was sure whether we were members, visitors, or regular attendees. Before the service one older man greeted another near us with a snide remark about the music chosen for the service. My guess is the older man was not happy with the lack of hymns. After the service, one woman in the line to leave complained to her friend that the preacher spoke so fast that she really could not understand him. The other woman shared that she was not planning to come back to the evening service herself, but she might invite her younger neighbors to attend! I thought of the children’s song: "Oh, be careful little mouth what you say!"
Of course, I began to wonder what guests hear when they visit our church. Mature believers know that everything we do and say is part of our witness. This is particularly true of what we do and say in church. Others are watching and listening. They may be guests visiting our church, or immature Christians, or children, or non-believing attendees. Do our words in church and life edify and bear witness to mature faith in Christ?
Posted by Jeffrey T. Riddle at 5:46 PM No comments: 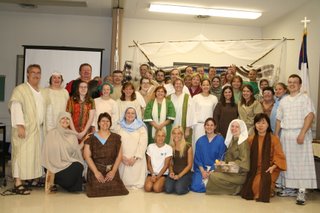 Pictured above is part of the JPBC team of youth, students, and adults who have made our 2006 Vacation Bible School work. Despite extremely hot weather in central Virginia we have had an excellent VBS thus far and have ministered to scores of children from our community. We are using the Group "Bethlehem Village" VBS that centers on telling the Christmas story. The children are divided into the twelve tribes of Israel. Children of various ages (from preschool to grade 6) are in a tribe together with youth and adults leaders. I think this "intergenerational" concept has worked great. It seems when kids are grouped only with children of their same age, they can compete with and pick on each other. This year it has been great to see older children enjoying being with and helping the younger ones. Of course, we have done it all in costume. It is also interesting to see how the children begin to identify with the Israelites and resent the "Roman" characters/leaders. One of the best things about VBS, of course, is just the fellowship and "shared experience" we all enjoy in working together in ministry. Our VBS directors, Melia Hatfield and Stephaine Glass, both elementary school teachers, have done a great job in organizing this event.
Posted by Jeffrey T. Riddle at 9:55 AM 2 comments:

It's been a long time since my last post. I got busy this week with various and sundry things and had little time for writing. Among other things:
Last night (Friday) I hosted four folk (two father-son combos: John and Sam; Doug and Josh) from Calvary Memorial Church in Roanoke (where our former members the Rawlings family are now connected). Enjoyed the fellowship with these guys. They left my house at 4:45 am for the C-ville airport to fly to Atlanta and rendezvous with the rest of their team (that flew from Roanoke) and then on to Honduras, where they will be doing two VBS ministries and some construction projects for local churches.
Llew and kids have been camping at Chincoteague with Cris Widder and her son David since Wednesday and come home this afternoon.
Another highlight of the week: Yesterday I went out to our garden and picked a mess of grean beans and a squash which I cooked (beans) and fried (squash) and had an all-garden lunch. Gotta love summer!
I did get around to updating my blog template to "minima blue" and finally figuring out how to add a few links.
More later!
JTR
Posted by Jeffrey T. Riddle at 1:01 PM No comments:

Letter to Prisoner of Conscience

Recently I have been reading Garnett Ryland’s book The Baptists of Virginia 1699-1926 (Virginia Baptist Board of Missions and Education, 1955). The history of early Baptists in Virginia is particularly striking reading on the week in which we celebrate our nation’s Independence Day. Early Baptists in Virginia suffered regular persecution. As dissenters, their pastors were arrested for preaching without a license or for meeting in unauthorized gatherings. They suffered the injustice of having their taxes support the Church of England, whose doctrine they opposed. It was no surprise that when the Revolutionary War began Baptists were among the first to enlist to fight against English tyranny. Even after the war for American independence was won, the Baptists continued to petition and send memorials to America’s Founding Fathers urging the safeguarding of religious liberty that American citizens enjoy today.
Here is one example of what early Baptists endured.
On August 21, 1773 Nathaniel Saunders, pastor of Mountain Run Baptist Church in Orange and William McClannahan, assistant pastor of Carter’s Run Baptist Church in Fauquier were arrested in Culpepper County on the charge that they did "Teach & Preach Contrary to the Laws & usages of the Kingdom of Great Britain, raising Sedition & Stirring up Strife amongst his Majestie’s Liege People." Saunders was brought to court on September 20, 1773 and committed to jail, because he refused to give bond that he would "neither teach, preach, nor exhort for one year except in his licensed meeting house."
He soon received this letter from David Thomas his spiritual father in the ministry:
Dear brother,
I hear you are put in prison for preaching the Gospel of Jesus Christ. Perhaps you may think it hard. But O, what honor has the Lord put upon you! I think you may be willing to suffer death now, seeing you are counted worthy to endure a dungeon for your Master’s sake. Hold out, my dear brother! Remember you Master—your royal, heavenly, divine Master—was nailed to a cursed tree for us. O, to suffer for him is glory in the bud! O, let it never be said that a Baptist minister of Virginia ever wronged his conscience to get liberty, not to please God, but himself! O, your imprisonment (which I am satisfied is not from any rash proceedings of your own) is not punishment, but a glory! "If you suffer with him you shall also reign with Him."
Dear brother, the bearer is waiting or I should have enlarged. This is only to let you know that I can pray for you with great freedom. Give my kind love to your fellow-prisoner, though I know him not. I hope he is a dear child of God. Pray for me, for I need it. I remain dear brother,
Yours in our dear Lord Jesus, David Thomas
Fauquier, September 26, 1773
N.B. Let me hear from you the first opportunity.
Note: See Ryland, pp. 80-81. Ryland cites the source as Religious Herald, October 30, 1856, copied from original sent by Nathanile Saunders’ grandson, Francis J. Saunders, to Williams Sands.
May God make us men and women whose consciences are likewise captive to Christ.
Grace and peace, Pastor Jeff Riddle
Posted by Jeffrey T. Riddle at 1:24 PM No comments:

A Story of Biblical Forgiveness

I am preaching through the parables of Jesus in Matthew 18-25 this summer at JPBC. Yesterday's message was "The True Foundation of Forgiveness," based on the parable of the unmerciful servant (Matthew 18:21-35).
Near the end I included this story of Biblical forgiveness from Eric Wallace's book Uniting Church and Home:
About fifteen years ago, a married man in our church got angry with his wife and shot her in the head. Miraculously the woman survived. Her husband went to jail. Years later, however, the man repented of his sin and asked his wife’s forgiveness. Today they are still married. I know this man fairly well. I remember his telling the congregation about what he had done and how he had given God the glory for reuniting [him] and his wife. This was the most powerful example of God bringing healing and forgiveness I have ever seen. To this day, it serves as a reminder of how great God’s power is, even in the darkest circumstances (p. 181).
JTR
Posted by Jeffrey T. Riddle at 10:09 AM No comments: