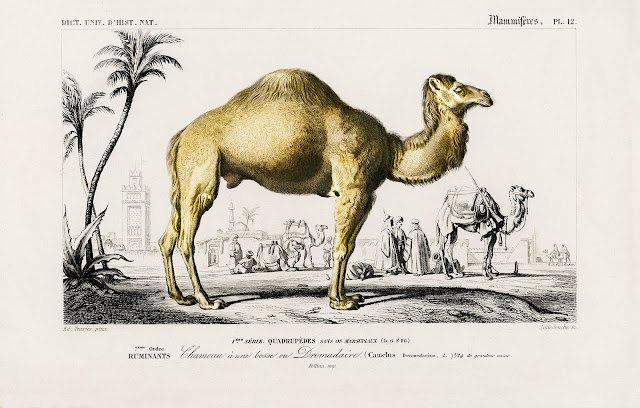 Matthew 23:23 Woe unto you, scribes and Pharisees, hypocrites! for ye pay tithe of mint and anise and cummin, and have omitted the weightier matters of the law: judgement, mercy, faith: these ought ye to have done, and not to leave the other undone. 24 Ye blind guides, which strain at a gnat, and swallow a camel.

In Matthew 23, Christ acts as the Great Prophet declaring a series of woes against the scribes and Pharisees for the sin of religious and spiritual hypocrisy.

In v. 23, he condemns them for their scrupulosity in tithing even the herbs in their gardens (mint, dill, and cummin), while neglecting “the weightier matters of the law, judgement, mercy, and faith.” They were good at meticulously counting the seeds of their herbs, but not so good at keeping the “Golden Rule” (Matthew 7:12) or the Great Commandment to love God with all your heart, soul, and mind, and your neighbor as yourself (Matthew 22:36-40).

In v. 24 Christ offers a negative application of this principle. In their effort to avoid minor infractions of the law, they had committed major infractions.

He then offers one of the most memorable statements in the Bible, as he says these men, “strain at a gnat, and swallow a camel” (v. 24b).

One Study Bible explains: “Some Pharisees would strain their beverages through fine cloth to make sure they did not inadvertently swallow a gnat—the smallest of unclean animals (Lev 11:23). The camel was the largest of all the unclean animals” (MacArthur Study Bible).

Charles Spurgeon observed, “There are gnat strainers among us still, who apparently have little difficulty in swallowing a camel, ‘hump and all’” (Matthew Commentary, 357).

We are meant to ask: What is Christ saying about me? What warning is he giving to me?

Have I in my zeal to strain at a gnat, swallowed a camel?

Posted by Jeffrey T. Riddle at 1:42 PM No comments:

Glad to see that Brent Evans' article "Preaching in the Name of the Amen" has been translated into French and can be read online here.

Labels: Brent Evans, Why I Preach From The Received Text 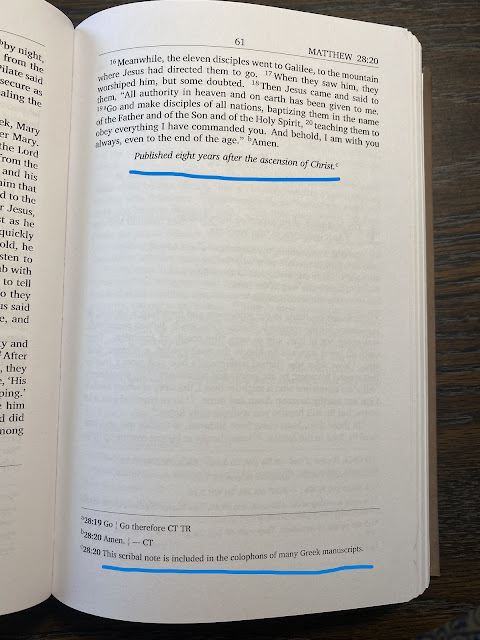 Dating the Gospels is a longstanding challenge in NT studies. 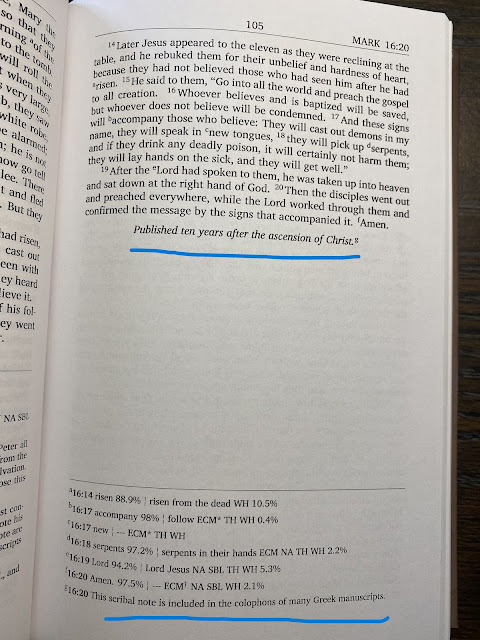 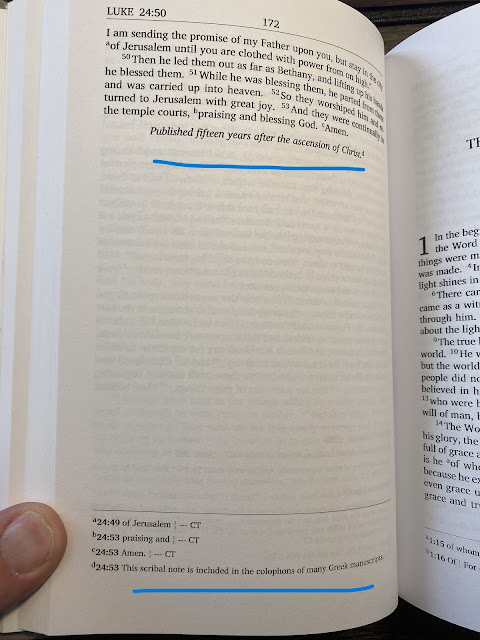 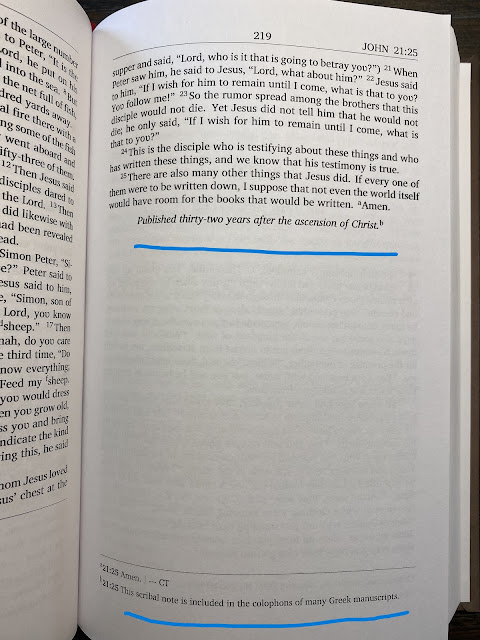 Update (1.25.23):
Nelson Hsieh noted on Twitter that Tommy Wassermen and his student Conrad Thorup Elmelund addressed this colophon tradition in a 2022 SBL paper suggesting that the subscription was taken from Hippolytus of Thebes and reflects a "cascading error" in the entries on Mark-Luke-John with the time reference being not to years after the ascension but the writing of the previous work. 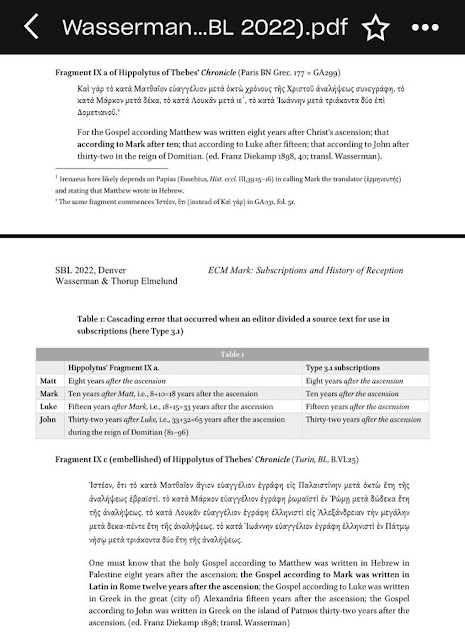 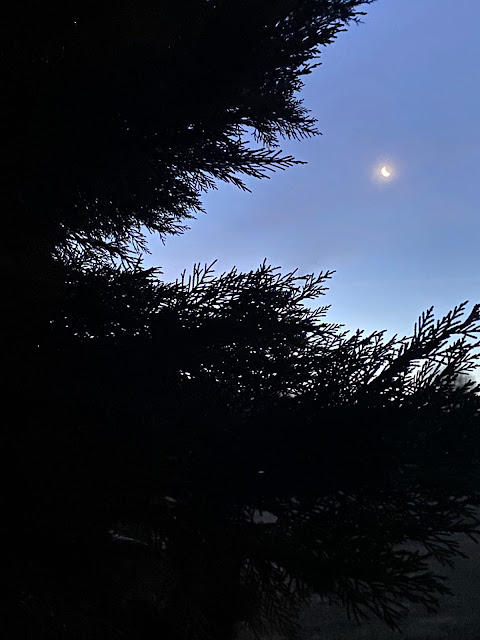 Note: Devotion taken from last Sunday's sermon on Matthew 23:13-22 (audio not yet available).

But woe unto you, scribes and Pharisees, hypocrites! for ye shut up the kingdom of heaven against men: for ye neither go in yourselves, neither suffer ye them that are entering to go in (Matthew 23:13).

In the first woe he speaks about the kingdom of heaven. This is the rule or the reign of God that began with the first coming of Christ and will be fulfilled at his second coming.

It was at the heart of Christ’s early preaching, as he declared, “Repent: for the kingdom of heaven is at hand” (Matthew 4:17).

In the Sermon on the Mount, he exhorted his disciples, “But seek ye first the kingdom of God, and his righteousness” (Matthew 6:33).

Experiencing the kingdom of God in the here and now is having the rule and reign of Christ invade your life, your present existence, and transform it for the glory of God and for your good and the good of others.

In the first woe of Matthew 23, Christ says that one of the chief sins of the spiritual hypocrites is that they shut up the kingdom of heaven (v. 13b). They do so in two ways:

First, they shut themselves out of the kingdom: “for ye neither go in yourselves.”

Second, they shut out others from entering the kingdom: “neither suffer ye them that are entering to go in.”

Imagine a hospital where those with sickness can be cured, and there is sick man who not only refuses to go into the hospital and be cured, but he tries to dissuade others who are sick from entering. He even shuts the doors and throws his body across the entrance to keep them out.

How does the hypocrite do this? He does so by saying that he is a believer, by saying he is a disciple, but by then failing to believe and live and act as a disciple. Christ says, “for they say, and do not” (Matthew 23:3).

How do we respond to this teaching? We are meant to examine our own hearts and to ask: How am I like the scribes and Pharisees? What warning is Christ giving to me?

Let us soberly look at ourselves, repent of our failings, and turn to Christ who always stands ready to forgive and redirect sinners.

Posted by Jeffrey T. Riddle at 2:28 PM No comments:

I enjoyed listening to this recent sermon by Ryan Davidson of Grace Baptist Chapel in  Hampton, Virginia. Good model for acknowledging textual challenges in the PA, affirming its authenticity, and drawing solid pastoral applications.
JTR
Posted by Jeffrey T. Riddle at 9:28 AM No comments:

This is a sermon by Pastor Sam Caldwell of Grace and Glory Church in Portland, Maine. In it, he focuses on Matthew 5:18 and the infallibility and preservation of Scripture.
JTR
Posted by Jeffrey T. Riddle at 8:56 AM No comments:

WM 263: Chris Myers on Why I Preach from the Received Text

Note: Devotion taken from the afternoon sermon at CRBC on Sunday, January 1, 2023.

The final chapter of Habakkuk is described as “A prayer of Habakkuk the prophet” (3:1). This prayer concludes in 3:17-29 with an affirmation of faith and a confident declaration that God is to be worshipped regardless of the external circumstances his people must face.

Pagan religions are based on a quid pro quo. You scratch my back, and I’ll scratch yours. But Biblical faith is not like that. The one true God is to be worshipped no matter what comes our way, no matter what the Lord in his all-wise providence decrees for us.

In contrast to the pagan view, Habakkuk declares:

3:17 Although the fig tree shall not blossom, neither shall fruit be in the vines; the labour of the olive shall fail; and the fields shall yield no meat; the flock shall be cut off from the fold, and there shall be no herd in the stalls: 18 Yet I will rejoice in the LORD, I will joy in the God of my salvation.

The evidence of a mature faith is not that you praise the LORD when things are going well, but that you turn to him when things seem awful and beyond your control. There is confidence even in such times that the Lord will be our strength and that he will cause us like the deer to walk in high places once again (v. 19).

This is the kind of faith that Job had. When he had lost everything, Job declared, “Naked came I out of my mother’s womb, and naked shall I return thither: the LORD gave, and the LORD hath taken away; blessed be the name of the LORD” (Job 1:21).

It is the kind of faith that the three Hebrew youths had when threatened with the fiery furnace. They said to the king, “If it be so, our God whom we serve is able to deliver us from the burning fiery furnace, and he will deliver us out of thine hand, O king, But if not, be it known unto thee, O king, that we will not serve thy gods, nor worship the golden image thou hast set up” (Daniel 3:17-18).

It is the kind of faith that the apostle Paul had when he wrote from a Roman prison, “Rejoice in the Lord alway: and again I say, Rejoice” (Philippians 4:4).

Friends, we know not what will come our way this year. It may be our last year.

We pray it will be filled with great outward prosperity and blessing, but do we have that sort of mature faith, so that even if it is a year of emptiness we are still resolved to rejoice in the Lord, to joy in the God of our salvation, and to acknowledge him as our strength, even in our weakness?

I pray we will have the same spiritual orientation as the prophet Habakkuk in this year before us.

Posted by Jeffrey T. Riddle at 4:18 PM No comments: