Below is the text of a poem Chris Marshall read at the annual JPBC "Talent Show" back on February 8th:
You, Congregation
adapted from
You, Reader by Billy Collins
I wonder how you are going to feel
when you find out
how long this sermon will be.
that it was I who stayed up late
to sit in the kitchen
and methodically construct
the fifty-seven bulleted points,
in your message notes,
on John 11:35.
Go ahead and turn aside,
bite your lip and scribble on the bulletin,
but, listen -- it was just a matter of time
before I happened to notice
that this room has no clock
and the doors can be locked from the outside.
I know you’ll be grimacing
at the introduction I so delicately crafted
after a mere thirty-four minutes.
But, we’ve really just started this morning--
and time cannot constrain us,
no matter how late we arrived from deacon prayer time.
I wonder if you can do the math
when twenty-three minutes has passed for bullet one
or if someone will be leading a revolt--
like Llewellyn
who manages to convey with a look
the bleak prospects for my future.
some day we all will laugh about this,
me, smiling and blogging at my computer
you, welcoming a new pastor to the pulpit.
JTR
Posted by Jeffrey T. Riddle at 7:44 PM No comments:

Note: This study resumes a verse by verse exposition of Jude began last year. This and previous entries are archived below under the label "Jude Exposition."
Jude 1:7 as Sodom and Gomorrah, and the cities around them in a similar manner to these, having given themselves over to sexual immorality and gone after strange flesh, are set forth as an example, suffering the vengeance of eternal fire.
Jude warns against the wrath and judgement of God. In 1:6 he describes God’s wrath upon the disobedient angels "who did not keep their proper domain." In v. 7 he highlights the classic Old Testament account of Sodom and Gomorrah (see Genesis chapters 18-19).
Note that Jude says the judgement was not just on those cities but also on "the cities around them." As Christians act like salt and light to those around them (Matt 5:13-14), so also evil has a corrosive and contaminating influence on those who surround it. Paul warns in 1 Corinthians 15:33: "Evil company corrupts good habits."
Note also Jude’s description of the passive nature of God’s judgement. The inhabitants of Sodom and Gomorrah had "given themselves over" to sin. In his description of sinners in Romans 1:24 Paul says, "Therefore God also gave them up to uncleanness, in the lusts of their hearts, to dishonor their bodies among themselves." Sometimes the most sever punishment God can render is letting us go our own way in sin without his gracious intervention. These wicked men brought God’s righteous wrath down on their own heads!
What was the nature of their sin? Jude says they gave themselves over to "sexual immorality" (Greek verb: ekporneuo). To be precise, they went after "strange flesh." This refers to the perversion of homosexual behavior (see Genesis 19:4-9). God created a simple, beautiful, good design of one man and one woman, joining in a one flesh union of covenant marriage that lasts a lifetime (see Gen 2:24). Anything less than that is an affront to a holy God (read carefully Romans 1:18-32).
As a result of their sin, those who insulted God suffered "the vengeance of eternal fire." Sodom and Gomorrah were destroyed by "brimstone and fire" (Gen19:24). More fearsome than any temporal judgment, however, is the warning here about eternal judgement for the wicked. Jesus taught that we should not merely fear the one who can harm the physical body, but he said, "Fear Him, who after He has killed has the power to cast into hell; yes, I say to you, fear Him!" (Luke 12:5). Jude 1:7 also calls on us to fear God.
Application:
1. How does this passage refute our tendency to stress God’s grace but to ignore his wrath and judgement?
2. Where would we be if God simply "gave us over" to our sinful desires?
3. Why is homosexual behavior offensive to God?
4. What does this text teach us about the reality of hell?
5. How will warnings like this one be used of God to keep you from sin and to admire more Christ’s work on the cross?
JTR
Posted by Jeffrey T. Riddle at 8:41 AM No comments:

The mystery of unbelief

Some ammunition for fighting pride.

Posted by Jeffrey T. Riddle at 5:32 PM No comments: 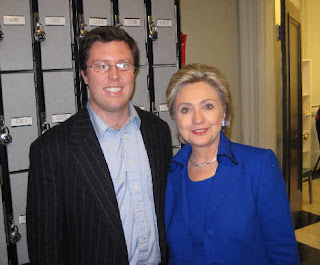 Hillary spoke to a politics class at UVA yesterday and Steve found a new mentor.
Anyone like to provide a caption?
JTR
Posted by Jeffrey T. Riddle at 4:48 PM 1 comment:

A few weeks ago I was preaching on the exorcism of the Gadarene Demoniac in Mark 5:1-20 and was struck by something I saw in the last couple verses that I had not seen before.
In v. 19 Jesus tells the man from whom he cast out "Legion" to go tell his countrymen "what great things the Lord has done from you." Then in v. 20 Mark writes that the man went out to proclaim "all that Jesus had done for him." The indirect implication: Jesus is equivalent to the Lord (the God of the Old Testament).
Compare Luke’s version of the story:
Luke 8:39 "Return to your own house, and tell what great things God has done for you." And he went his way and proclaimed throughout the whole city what great things Jesus had done for him.
A great Christological lesson is being taught indirectly at the end of this passage. An affirmation is being made about Jesus’ identity.
Last Saturday morning while I was sitting at home in my pajamas, a couple of well dressed Jehovah’s Witnesses came to my door and I was able to talk with them for a few minutes about what the Scriptures say about Christ. I was able to turn with them in their "New World Translation" to Mark 5:19-20 and then Luke 8:39. We also looked at John 10:30 ("I and my Father are one"); to Thomas’ words in John 20:28 ("My Lord and my God!") and Paul’s words in Romans 10:9 (If you confess with your mouth "Jesus is Lord"…). They made no concessions, but maybe some seeds of doubt were sown in their minds that might dislodge their acceptance of what JWs teach about who Scriptures say Jesus is.
JTR
Posted by Jeffrey T. Riddle at 5:54 PM 2 comments:

Are your children safe?

The front page of today's Daily Progress had an article about a boy who brought a gun to a local middle school. Are your children safe in the environment in which they are being educated? Is this true not just of their obvious physical safety but also of their spiritual and worldview well being?
JTR
Posted by Jeffrey T. Riddle at 1:55 PM No comments:

Have you ever heard of a poor Protestant country?

Last Saturday my family and I were invited to friend's home for lunch. There I met with a Bulgarian Church of God Pastor who is living in Charlottesville and working on a translation of the New Testament in the Romany (Gypsy) language. At one point in our conversation as we discussed the state of the evangelical church in Bulgaria he asked, "Have you ever heard of a poor Protestant country?" and then, "Have you ever heard of a Muslim country where there is democracy?" His point was that Biblical Christianity brings blessings to a nation, its culture, and its peoples.
JTR
Posted by Jeffrey T. Riddle at 10:28 AM No comments: