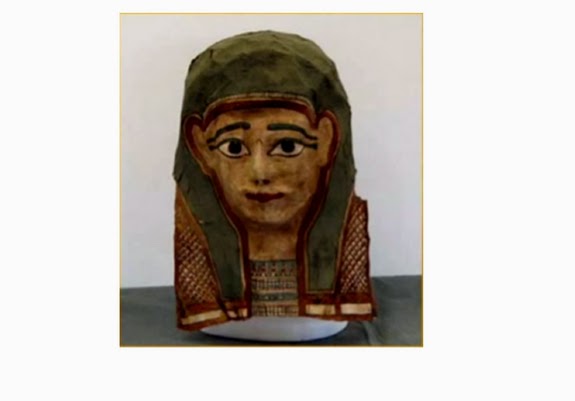 Image:  An Egyptian mummy mask like that in which the Mark papyrus fragment was reportedly found.

Note:  Yesterday I posted WM # 33:  Recent Mark Fragment Papyrus Discovery. The article below provides the information covered in this edition (the article can also be viewed here):

I had two persons this week contact me and ask about my response to a 1.20.15 Washington Post article which makes reference to a papyrus fragment of the Gospel of Mark that has recently been found in an Egyptian mummy mask.  The article cites an earlier one (dated 1.18.15) on a website named Live Science.  The article also includes a youtube video of Dr. Craig Evans, a well respected professor at Acadia Divinity School in Canada, discussing this find in a July 2014 Apologetics Conference (note:  the video was posted over six months ago).  Indeed, the announcement of this “discovery” is not exactly news.  Dan Wallace made reference to it in a debate with Bart Ehrman in 2012 (read Ehrman’s reaction here).

Aside:  My limited experience in reading Evans has shown him to be one of those evangelical scholars whose commitment to the academy often leads him to take uneven positions.  For examples:  On one hand, he contributed an excellent chapter to the book How God Became Jesus (Zondervan, 2014) proving the historicity of the burial of Jesus, contra the historical skepticism of Bart Ehrman.  On the other hand, he contributed an article to the book Bart D. Ehrman & Daniel B. Wallace in Dialogue:  The Reliability of the New Testament (Fortress Press, 2011) in which he conjectured that Matthew 27:51b-53 (the account of some dead being raised at the crucifixion of Jesus) was not authentic despite the fact that the text is completely undisputed in transmission!

The claim put forward by Evans here is that this yet unpublished fragment may date to 80 AD (a spoken claim Evans makes in the video) or 90 AD (a written claim made in the article).  If substantiated, what would be the significance of this?  It would prove the early existence of the Gospel of Mark (but most modern scholars, even skeptical ones like Bart Ehrman, already date Mark to the mid-60s AD).   Evans also claims that such a find gets scholars back to the original “autograph” of Scripture (at least of the Gospel of Mark).

(1) To offer some general background information on NT papyri;

(2) To clarify some confusion about the significance of the papyri;

(3) To offer some reasons why this find is probably not as significant as some might suppose.

First:  I want to offer some background on the papyri:

What is a papyrus (plural papyri)?  This term refers to writing material that was made from a plant which grows along the Nile in Egypt.  A NT papyrus is a piece of papyrus on which a part of the text of the NT is written.  The earliest NT texts and fragments of texts which we have are written on papyri.  The material itself dates the text as very ancient.  From about the fourth century AD till the fifteenth century AD, the NT was written on vellum (animal skins).  From then till now it has been written on paper.  And we are currently undergoing another technological revolution in which texts are being written digitally.  Cf.:

The Chester Beatty Papyri in the early 1930s [which included p46, the oldest copy of the Pauline writings, (dated to c. 200 AD).  The beginning pages are missing.  Its order:  Romans (from 5:17, opening is missing), Hebrews, 1-2 Corinthians, Ephesians, Galatians, Philippians, Colossians, and 1 Thessalonians.  The final pages are missing and their content is uncertain].

Notice how the numbering goes up with time.  The name/numbers assigned come from a numbering system created by a scholar named Caspar R. Gregory (1846-1917).  These numbers are assigned once a discovery is made by the Institut für neutestamentliche Textforschung (Institute for NT Textual Research) in Münster, Germany.

How many papyri do we now have?  The Nestle-Aland 28th edition of the Greek New Testament lists the papyri through p127 (including the date, library location, and content). The estimated dates for these works range from the second to the eighth centuries, with most dating to the third and fourth centuries.  Some contain only a single verse or fragment of a verse (e.g., p12 contains Hebrews 1:1).  More commonly, they consist of several verses (e.g., p98 has Revelation 1:13-20).  Others, however, more rarely, preserve the text of entire books (e.g., p72, as discussed below, has most of 1-2 Peter and Jude).  For comparison, the NA 27th edition (1993) listed papyri through p98 and the NA 26th edition (1979) through p92.  Clearly, the number in the handbook has grown over time as further discoveries have been made.  Cf.:

Second, I want to clarify some confusion about the significance of the papyri:

I already noted that we must be clear that the modern critical Greek NT was based on uncials not papyri.  In fact, Eldon Jay Epp in a 1974 JBL article once famously called the twentieth century a mere “interlude” in NT textual criticism since so little had been changed or developed in the consensus regarding the modern critical text since WH in the nineteenth century.

More importantly, it is often falsely assumed that the papyri finds only reinforced WH and the modern critical text.  In fact, the opposite is true.  If WH were right one would have expected the papyri consistently to reflect the so-called “Neutral text” of Codex B.  Instead, scholars find that the papyri reflect a “mixed text.”  They include so-called Alexandrian, Western, and Caesarean readings, and, this is the shocking part, the papyri also include Byzantine readings!

The book to read here is one by Harry A. Sturz, The Byzantine Text-Type & New Testament Textual Criticism (Thomas Nelson, 1984).  This book includes an Appendix which lists 150 papyri passages that reflect a Byzantine reading.  Sturz notes that WH’s claim that the Byzantine text could not be found earlier than the third century “vanished into thin air in the presence of the papyri” (p. 63).

Third, I want to offer some reasons why this find is probably not as significant as some might suppose:

First, we do not know anything about the length of this fragment or which part of Mark it comes from. It is probably only a verse or two at most. It would be great if it came from Mark 16:9-20!

Second, we do not know whether or not it comes from an orthodox source.  If it only consists of a verse or two (or maybe even part of a single verse), how do we know for sure that it comes from canonical Mark?  It could come from a Gnostic document that quotes Mark.  The orthodoxy and the canonical integrity of the papyri are suspect. P72, for example, includes 1-2 Peter and Jude but it also includes:  The Nativity of Mary, Apocryphal Correspondence of Paul and the Corinthians, the eleventh Ode of Solomon, Melito’s Homily on the Passover, a hymn fragment, the Apology of Phileas, and a Greek version of Pss 33 and 34.

Third, the dating of papyri is notoriously difficult and can be subjective.  Example:  For a long time, most scholars have argued that the oldest NT text is p52, the John Rylands Fragment, which contains a fragment from the Fourth Gospel [John 18:31-33, 37-38].  A 2005 article by Brent Nonglobri titled “The Use and Absue of p52:  Papyrological Pitfalls in the Dating of the Fourth Gospel” [HTR 98 1 (2005):  23-48], however, pointedly challenges the early dating of p52.  A recent post on the Evangelical Text Criticism blog by Dirk Jongkind has suggested that the oldest NT papyri may, in fact, be p104’s fragment of Matthew 21:34-37, 43-45? (he also points out, coincidentally, that 104 is twice 52!).  Regarding the dating of this supposed Mark fragment, see this post by P. J. Williamson in which he states, contrary to claims by Evans and Dan Wallace, that this fragment could not possibly be precisely dated to 80 AD!  See also his comments about the ethics of destroying mummy masks!

Fourth, most importantly, this report illustrates the pitfalls of chasing manuscripts to attempt to prove or disprove the validity and historicity of Scripture.  The Lord did not allow the autographs to be preserved.  Finding scraps of papyri will not prove or disprove the authority or antiquity of the Bible to skeptics.  In 2012 Dan Wallace apparently claimed that this find could be as significant as the Dead Sea Scrolls discovery, to which Bart Ehrman responded:  “He is wrong about that.  In fact, if it is just a scrap, as it appears to be, then it probably will not change a single, solitary thing in the entire field of NT textual criticism.”  I have to agree here with Ehrman.  Confessional Christianity teaches that God providentially preserved his word in the faithful copies that were made and used by God’s people.  That is not to say there is not a place for scholarly study and for the collection of papyri for historical study, but let’s not make overstatements and false claims about what such finds can actually establish.  We know we have the word not because of papyri witnesses but because of the providentially preserved text’s own self-authenticating power.

The follow is James White's view on this article that he posted at the FB Group Reformed Pub.

Riddle's article is a study in obfuscation and tradition mongering and it most assuredly did not "refute" me or anyone else for that matter. It is however an excellent example of Christian retreatism. I will say more but I am about to take off and have three dialogues and debates over the next 72 hours on other topics.

Thanks for the post (and heads up) JG. Well, no one likely ever accused JW of subtlety or understatement. I wonder if he considers it "obfuscation and tradition mongering" when he defends doctrines like Calvinism, the Trinity, etc. I would be interested to hear his response if he gets time for it. Oh well, back to tradition mongering....

Hi Jeffrey T. Riddle, could you share the positive arguments for the inclusion of Mark 16:9-20. Thank you!

That was fast! Thank you!