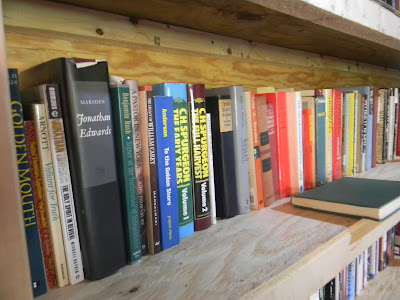 
This book provides a brief, concise introduction to the distinctive beliefs and practices of a Reformed church.  It is both clear and charitable and has been a good book to pass on to visitors and inquirers to our church.  It was especially nice to read after meeting Pastor Watts in person and having him preach at CRBC in September 2011.


Though I did not always agree with his method or conclusions, I profited from reading this weighty systematic theology from a distinctively Reformed perspective.


This book by apologist Michael Brown offers a compelling and well-documented review and analysis of advocacy for acceptance of homosexual practice in American and Western culture.  What is amazing is how much further things have developed in the single year since this book was published.


Reprinted this year by Banner on the 350th anniversary of “The Great Ejection,” this book provides an anthology of sermons from various Puritan Pastors who were forced from their pulpits due to conscience.


This author of this book, a former professor at Syracuse University, tells the story of her unlikely conversion to Christ through the faithful witness of a Reformed pastor and his church and the not always smooth process of sanctification that has taken place in her life.


This book offers an insightful survey of modern historical-critical Life of Jesus research from a conservative, evangelical perspective.


I finally had the chance to give this classic of New Testament scholarship a close reading in preparation for teaching a class on “The Life and Teachings of Jesus” in the Spring.  Though a translation from the German original which covers detailed and technical topics, this work held my interest with its wit, penetrating insights, aphoristic expressions, and often biting sarcasm.  I totally disagree with Schweitzer’s conclusions but am in awe of his accomplishment.


One of my interests this year was learning more about the Enlightenment.  To that end, I enjoyed reading this biography of Rousseau.  What a man of contradictions.  He writes classic works on education but abandons his own children to the orphanage!
9.     John Flavel, The Mystery of Providence (orig. 1678; Banner of Truth, 1963):  221 pp.


You can’t go wrong with reading a Puritan paperback!  Flavel’s writing style in this book rivals Thomas Watson in its ease of access.  I found his thoughts on God’s providential care extremely encouraging.


This is a creative and practical “how to” book on preaching that I found a stimulating help in sermon preparation.


Theology and ministry:  Joel R. Beeke, Getting Back in the Race: The Cure for Backsliding (Cruciform Press, 2011); W. Gary Crampton, Grant What Thou Commandest:  The Theology of Augustine of Hippo (NiceneCouncil.com, 2011); Timothy Nelson, The Head Covering:  What Saith the Scriptures?  (Mourne Missionary Trust, n. d.); Peter Jeffrey, Bitesize Theology:  An ABC of the Christian Faith (Evangelical Press, 2000); J. V. Fesko, What is Justification? (P & R, 2008).
Posted by Jeffrey T. Riddle at 11:08 PM