The Benefits of Christian Community: Marriage 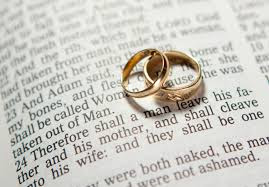 This post continues notes from my sermon preached on December 11, 2016 on "The Benefits of Christian Community" from Ecclesiastes 4:9-16.

We should realize that not every Christian will be called to marriage.  Jesus himself never married, and he was the perfect example of contentedness and satisfaction in all his relationships.  Some will be called to singleness, and some will be single due to the providential circumstances of their lives.  In fact, man in the glorified state will be single, since at the resurrection there will be neither marriage nor giving in marriage (Matt 22:30).  The glorified man will be singly devoted to God alone.

In this life, however, we have the institution of marriage as the bedrock of the family.  Even those who do not marry benefit from the community that comes through marriage and family.

When God made the first man we read:

Genesis 2:18 And the LORD God said, It is not good that the man should be alone; I will make him an help meet for him.

Genesis 2:24 Therefore shall a man leave his father and his mother, and shall cleave unto his wife: and they shall be one flesh.

Sin and the fall brought distortion into that relationship, but it is still good in God’s sight.  In fact, Paul tells us in Ephesians 5 that the marriage relationship reflects the great mystery of the relationship between Christ and the church.

We are living in a culture that is increasingly hostile to marriage, whether that comes in the form of the culture’s attempt to disregard God’s good design of gender or the state’s attempt to replace the father’s care for his household.  But Jesus said:  “What therefore God hath joined together, let not man put asunder” (Matthew 19:6b).

It provides mutual defense against temptation and attacks (cf. Ecc 4:12).

And when the two conceive a third, their own child, this is the cord that binds them even closer together and makes their union even stronger.

For a Christian, of course, the standard is that he would only seek marriage to a fellow believer.  He cannot be unequally yoked (2 Cor 6:14). Paul told Christian widows they could re-marry but “only in the Lord” (1 Cor 7:39).

For the Christian, marriage is an act of discipleship.  Your partner becomes your dearest companion and your co-laborer in the gospel.  Think of Aquila  and Priscilla in Acts 18 who ministered both to Paul through hospitality and to Apollos through discipleship.

In the third century a Christian theologian named Tertullian wrote a treatise on marriage wherein he said the following:

Beautiful the marriage of Christians, two who are one in hope, one in desire, one in the way of life they follow, one in the religion they practice.

They are both servants of the same Master.  Nothing divides them either in flesh or spirit.

They are two in one flesh, and where there is one flesh there is also one spirit.

They have no secrets from one another; they never bring sorrows to each other’s hearts.

Unembarrassed they visit the sick and assist the needy.  They give alms without anxiety.

Psalms and hymns they sing.  Hearing and seeing this Christ rejoices.  To such as these He gives His peace.

Where there are two together, there also He is present; and where He is, there evil is not.