Calvin: And there were shepherds 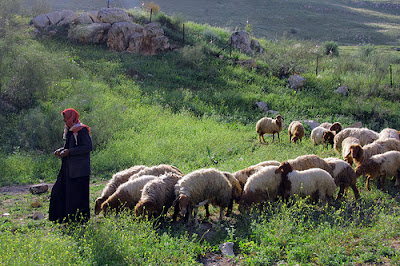 Note:  John Calvin’s commentary on Luke 2:8.  It is interesting that Calvin sees the shepherds in Luke 2 as foreshadowing the role of pastors/elders/bishops in the church.  Like the shepherds, pastors are humble men, taken “from among the dung of beast,” given the task of telling others about Jesus.

Luke 2:8 And there were in the same country shepherds abiding in the field, keeping watch over their flock by night.

It would have been to no purpose that Christ was born in Bethlehem, if it had not been made known to the world.  But the method of doing so, which is described by Luke, appears to the view of men very unsuitable.  First, Christ is revealed but to a few witnesses, and that too amidst the darkness of night.  Again, though God had, at his command, many honorable and distinguished witnesses, he passed by them, and chose shepherds, persons of humble rank, and of no account among men.  Here the reason and wisdom of the flesh, must prove to be foolishness; and we must acknowledge that “the foolishness of God” (1 Cor 1:25) excels all the wisdom that exists or appears to exist, in the world.  But this too was a part of the “emptying of himself” (Phil 1:6), not that any part of Christ’s glory should be taken away by it, but that it should lie in concealment for a time.  Again, as Paul reminds us, that the gospel is mean according to the flesh, “that our faith should stand” in the power of the Spirit, not in the “lofty words of human wisdom,” or in any worldly splendor (1 Cor 2:4-5), so this inestimable “treasure” has been deposited by God, from the beginning, “in earthen vessels” (2 Cor 4:7), that he might more fully try the obedience of our faith.  If we desire to come to Christ, let us not be ashamed to follow those whom the Lord, in order the cast down the pride of the world, has taken, from among the dung of the beast, to be our instructor.