Ignatius of Antioch on early Christian "charters" or "archives" [archeia] 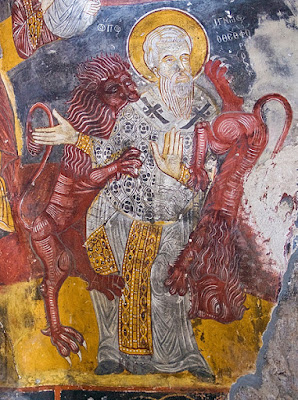 Image:  Artist's depiction of the martyrdom of Ignatius of Antioch.

Ignatius of Antioch was one of the leading early Church Fathers.  He died as a martyr in Rome in 108 AD.  While being transported to Rome as a prisoner he wrote a series of letters to Christian communities.  In one of these, the letter to the Philadelphians (VIII, 2), Ignatius makes an interesting comment that might be related to the transmission and preservation of Scripture.  In writing against schism, Ignatius exhorts:

But I beseech you to do nothing in factiousness, but after the teaching of Christ.  For I heard some men saying, “if I find it not in the charters [archeiois] of the Gospel I do not believe,” and when I said to them that it is in the Scripture, they answered me, “that is exactly the question.”  But to me the charters [archeia] are Jesus Christ, the inviolable charter [archeia] is his cross, and death, and resurrection, and the faith which is through him;---in these I desire to be justified by your prayers (from Kirsopp Lake, trans., Apostolic Fathers I, Loeb Classical Library).

Ignatius seems to be opposing some who say they will not believe a matter unless it can be shown to be in the “charters of the Gospel.”

The question is what is meant by “the charters” [archeia, neuter plural of archeion].

Most commentators take the word to mean “the original records” and to refer to Jewish Scriptures regarded as “archival records” or “charter documents” of the church.  This is surely correct but does not necessarily exhaust the sense of this unique designation of Jewish Scripture, for the word alludes to the place where such writings were deposited and available.  Since its use by Ignatius’ opponents has no clear ulterior motivation, all the more may it imply the existence of an archive or library of the Antiochene church where the Jewish scriptures, among other documents, were kept (p. 153).

What is interesting here is the notion that early Christian churches, like that at Antioch, would have had archives (archeia) where Scripture and other writing might have been stored for comparison and consultation.  If so, the early Christians would be following the tradition of the Jews who kept authoritative copies of the Hebrew Bible and other documents in the temple and in important synagogues.
Lake and Gamble mention the “charters” here as the OT. They probably do not suggest it could also be authoritative manuscripts of the NT (the four Gospels, Paul’s letters, Acts and the catholic epistles, Revelation), since they likely posit a dating for their authoritative use as post 108 AD.  If, however, we take the archeia as referring to authoritative manuscripts of the NT, perhaps even autographa, this means the early Christians had reliable standards with which to compare copies made of various NT books.  This would argue against early transmission being as haphazard as is sometimes suggested.

BTW, Ignatius’ comments to those who appeal to these “charters” might seem on the surface to be a bit like contemporary Protestant liberals, when he says “the charters are Jesus Christ,” as if the important thing to him is not the written record but his understanding and experience of Christ.  On, the other hand, he does proceed to stress that “the inviolable charter is his death, cross, and resurrection, and the faith which is through him,” an emphasis clearly affirmed in the canonical NT as the heart of understanding Jesus, contra, e.g., gnostics.

I have doubts about the authenticity of the Ignatian epistles. That aside, it is clear that he was challenged by believers who put scripture before other symbols of supposed authority. It is perfectly clear that the “archeia” were writings regarded as Scriptures. Consider also what Tertullian wrote (175-185 AD) in his “On the Prescription of Heretics” : that, if you wish to exercise/indulge your curiosity, go to the “apostolic churches”, such as Corinth or Philippi or Ephesus or Rome, where “authenticae litterae” are read. “Authenticae litterae” can be read as “the authentic letters” or as “authentic letters”; so that either the original letters are still preserved (not impossible), or else accurate copies are stored (and so they cannot be much older than the original letters). Scrivener’s famous dictum is that the Scriptures were corrupted in the first one hundred years; and there is no doubt that this was so - but the number of uncorrupted copies was greater.