Paul, the historical Jesus, and 1 Corinthians 7 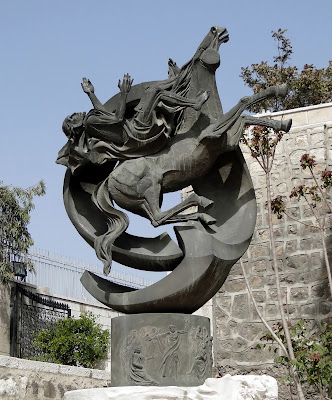 Image:  Modern statue of Paul's conversion at the Chapel of St. Paul in Damascus, Syria

What did Paul know about the historical Jesus?  This is a question still asked in NT scholarship.  Liberal scholars have suggested that Paul knew little about the historical Jesus. They even suggest that Paul distorted the message of Jesus, whom they see as having taught a simple ethical message about the Fatherhood of God and the brotherhood of man.  It is also said that in keeping with the free and charismatic nature of the early Christian movement, Paul’s knowledge of Jesus came from his own ecstatic experience rather than from reliable written and oral tradition.

Conservative scholars, of course, defend Paul’s knowledge of the historical Jesus and affirm that his teaching was in line with that of Jesus and his original disciples. Though Paul did have ecstatic experiences (cf. his meeting the risen Jesus on the Damascus Road in Acts 9 and other ecstatic experiences; cf. Gal :11-12; 2 Cor 12:1-4), this does not exclude his learning of Jesus through more ordinary means (cf. e.g.,  his consultation with the “pillars” in Jerusalem in Galatians 2).  There also seems to be some evidence that Paul knew of the Gospels or of the traditions incorporated in them.  Tradition held Luke to have been Paul’s companion.  If so, it would make sense that Paul might have known Luke’s Gospel and commended its use among the churches over which he had influence.  In 1 Timothy 5:18 we have what seems to be a quotation from Luke 10:17 (“And, The laborer is worthy of his reward.”) laid alongside a quotation from Deuteronomy 25:4 and mutually introduced, “For the scripture saith….”.  Many in the early church took Paul’s mention in 2 Corinthians 8:18 of “the brother, whose praise is in the gospel throughout all the churches” as a reference to Luke.

Some of this discussion has centered on how to interpret several of Paul’s statement in his teaching in 1 Corinthians 7.  Here are some comments on a few of these passages (and two others from 1 Corinthians):

1 Corinthians 7:10 And unto the married I command, yet not I, but the Lord, Let not the wife depart from her husband:

Here Paul says this command does not come only from him but also from the Lord.  Did he mean he got this from experience?  Is he saying that Jesus gave him a special revelation of this teaching?  Or, is he simply using spiritual language to describe having learned this teaching from settled Christian tradition or even from the written Gospels? Most likely he knows of a tradition where Jesus specifically forbade the abandonment of a spouse (cf. Matthew 19:3-9; Mark 10:3-12; Luke 16:18).

1 Corinthians 7:12 But to the rest speak I, not the Lord: If any brother hath a wife that believeth not, and she be pleased to dwell with him, let him not put her away.

Is Paul saying that this counsel is on a lower level of authority since it comes from him and not directly from the Lord (Jesus)?  Probably not.  Paul speaks as an apostle, and so he necessarily speaks with authority (cf. Galatians 1; 1 Thessalonians 2:13).  Perhaps he simply means he know of no place where Jesus directly addressed this particular situation, so he can only offer his authority as an apostle apart from supporting authority that might have come from a direct teaching of Jesus during his earthly ministry.

1 Corinthians 7:40 But she is happier if she so abide, after my judgment: and I think also that I have the Spirit of God.

Is Paul speaking tentatively here?  Probably not.  He is affirming that he thinks (dokeo) he has the Spirit of God.  The verb could also be rendered:  I assume, or I judge, or I determine.  All these sound much less tentative.  The teaching has authority in that it comes from Paul as an apostle and that it appears in an inspired letter.

1 Corinthians 11:23 For I have received of the Lord that which also I delivered unto you, That the Lord Jesus the same night in which he was betrayed took bread:

How did Paul receive this from the Lord?  Did it come through a vision?  Possibly, but more likely it is spiritual language for Paul having received reliable Christian tradition in oral or written form.  Compare Paul’s teaching here on the Last Supper and the institution of the Lord’s Supper with Luke 22:19-20.

1 Corinthians 15:3 For I delivered unto you first of all that which I also received, how that Christ died for our sins according to the scriptures;

Here Paul speaks of Christian tradition (paradosis) he is conveying which was handed down to him regarding the central facts of the gospel:  the death, burial, resurrection, and appearances of Jesus.

Conclusion:  Paul had received and knew faithful traditions about Jesus handed down to him by those who were Christians before him, especially from the original disciples of Jesus.  He may have known the canonical Gospels, especially Luke.  His knowledge of Jesus did not depend on ecstatic experience.   Paul drew instead on the traditions he received in his teaching, but when he did not have this direct guidance he could still assert his teaching authority as an apostle.
Posted by Jeffrey T. Riddle at 4:08 PM