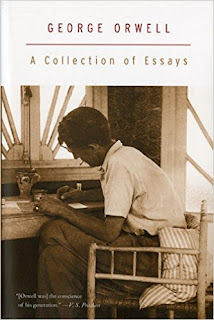 I’ve been on a recent binge of reading essays.  Over the past few months I read two collections of essays from Joseph Epstein (A Literary Education and Essays in Biography).  Last week I finished reading George Orwell, A Collection of Essays (Harvest Books, 1981).

The Orwell book includes 14 essays of varying length, on sundry topics, and from various times in his life.  They include everything from his vivid and sometimes chilling memories of childhood in an English boarding school under the watch of cruel and sadistic caregivers (“Such, Such Were the Joys . . .”) to his reflections on the life and writings of famous men, like Dickens, Kipling, and Ghandi (“Charles Dickens,” “Rudyard Kipling,” “Reflections on Ghandi”) and his reflections on his various personal experiences.  These include his musings on British imperialism drawn from his time as a policeman in Burma (in “Shooting an Elephant”), on his volunteer service in the Spanish Civil War fighting fascism (“Looking Back on the Spanish War”), and his assessment of English patriotism (“England Your England”).  It also includes essays on British popular art and literature (in “The Art of Donald McGill,” “Raffles and Miss Blandish,” and “Boys’ Weeklies”) and his classic essays on writing (“Politics and the English Language” and “Why I Write”).

Orwell is a master essayist.  What makes his writing so interesting and inviting?  Here are at least three reasons:

First, he is a master of the opening line.  Here are a few examples:

Saints should always be judged guilty until they are proved innocent, but the tests that have to be applied to them are not, of course, the same in all cases (“Reflections on Ghandi”).

As the corpse went past the flies left the restaurant table in a cloud and rushed after it, but they came back a few minutes later (“Marrakech”).

As I write, highly civilized human beings are flying overhead trying to kill me (“England Your England”).

From a very early age, perhaps the age of five or six, I knew that when I grew up I should be a writer (“Why I Write”).

Second, he is a master of the arresting observation or statement.  Examples:

All art is propaganda.  Neither Dickens himself nor the majority of Victorian novelists would have thought of denying this.  On the other hand, not all propaganda is art (“Charles Dickens” p. 90).

When one says that a writer is fashionable one practically always means that he is admired by people under thirty (“Inside the Whale” p. 221).

So much of left-wing thought is a kind of playing with fire by people who don’t even know that the fire is hot (“Inside the Whale” p. 239).

The novel is practically a Protestant form of art; it is a product of the free mind, the autonomous individual (“Inside the Whale” p. 241).

[England] resembles a family, a rather stuffy Victorian family, with not many black sheep in it but with all its cupboards bursting with skeletons (“England Your England” p. 267).

Serious writers, I should say, are on the whole more vain than journalists, though less interested in money (“Why I Write” p. 312).

The opinion that art should have nothing to do with politics is itself a political attitude (“Why I Write” p. 313).

All writers are vain, selfish, and lazy, and at the very bottom of their motives there lies a mystery (“Why I Write” p. 316).

Third, he is an independent thinker and forthright writer.  He was a socialist who criticized his fellow contemporary liberals who failed to denounce Stalinism (see 1984 and Animal Farm).  He surprises by showing some begrudging admiration for the imperialist Kipling (“Rudyard Kipling”) and raising questions about the motivations of Ghandi (“Reflections on Ghandi”).  While Marxists might denounce Dickens for his “bourgeois morality” Orwell praises him as “a nineteenth century liberal, a free intelligence (“Charles Dickens” pp. 103-104).  Edgar Allen Poe’s outlook, on the other hand, “is at best a wild romanticism and at worst is not far from being insane in the literal clinical sense” (“Inside the Whale” p. 246).  Though clearly not a believer, one picks up on currents of respect for religion, especially Christianity and its influences for good in society, in Orwell.  One example:  In his description of a “certain cultural unity” that existed in the England of his day, he observes:  “All through the Christian ages, and especially since the French Revolution, the Western world had been haunted by the idea of freedom and equality; it is only an idea, but it has penetrated all ranks of society” (“Charles Dickens” p. 103).  One might call Orwell a conservative liberal, a religious unbeliever.  Whatever one’s convictions, he inspires clearer thinking and better writing.