The Vision (9.2.16): Remember your spiritual leaders 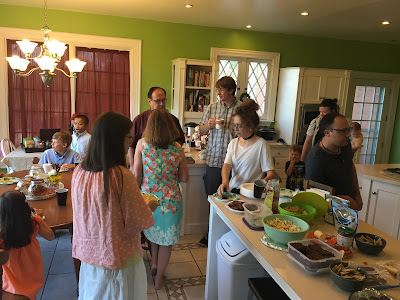 Remember those who rule over you, who have spoken the word of God to you, whose faith follow, considering the outcome of their conduct (Hebrews 13:7).

We begin with a command:  “Remember (the verb mnemoneuo:  to remember, to be mindful of, to call to mind, to think of, to hold in memory, to keep in mind) them which have the rule over you, who have spoken unto you the word of God” (v. 7a).  Some interpreters have suggested that this refers to remembering leaders who had died, perhaps as martyrs.  But it might also refer simply to keeping in mind leaders of both past and present.  One interpreter adds:  “It apparently required some effort for the Hebrews to respect their former leaders [he assumes they are dead], for otherwise the exhortation would not have been necessary” (Guthrie, p. 270).

There is something that might be jarring about this command for those of us living in our modern egalitarian, personal freedom culture.  This is hierarchical language.  The phrase “them which are over you” is from the Greek verb hegeomai.  It refers to those in leadership, those with authority to command and rule. This verb is the root for the English word “hegemony”:  rule or dominance of one over another.  This English term has a negative connotation that the Greek word does not.

Is it talking about civil rulers?  No.  Clearly the reference here is to spiritual leaders, to church officers, and especially to the elders.  Why?  Because they are the teachers, those “who have spoken unto you the word of God.”  The elders must be “apt to teach (cf. 1 Tim 3:2). They are those who are able “by sound doctrine” to exhort and convince (Titus 1:9).  The elders do not bear the sword, like the civil magistrate (cf. Romans 13:4).  Their only “weapon” is the word of God and their own words as they exposit the Scriptures.

Hebrews and the rest of the NT assume that Christians will be in churches where there will be officers whose duty and responsibility it is to teach the word of God and to exercise spiritual rule (cf. 1 Corinthians 16:15-16; 1 Thessalonians 5:12-13; Hebrews 13:17, 24).

Now, this rule is not like secular rule.  It is not tyrannical rule.  It is not authoritarian but authoritative.  Consider Peter’s exhortation that the elders not be “lords over God’s heritage” but “ensamples to the flock” (1 Peter 5:1-3).

That same theme is struck in Hebrews 13:7b:  “whose faith follow, considering the end of their conversation.” The verb rendered as “follow” is mimeo from which we get “mimic” and “mimeograph.”  The phrase could literally be rendered as “imitate their faith.”

So, the inspired author adds, “considering the end [ekbasis:  the outcome, the result] of their conversation [anastrophe:  manner of life, conduct, deportment]” (v. 7).

This is why when Paul lists the qualifications for an overseer (elder or pastor) in 1 Timothy 3 there is so much stress on his life and the life of his family (1 Timothy 3:1-7).  Does he manage his own life and his own household well?  Does he have a good relationship with his wife and children?  Are his children obedient?  In this way being an elder is like being a politician.  Not only does he have this calling but so does his family.

The key thing is that he be a model in his faith, in his fundamental trust and confidence in the Lord.

Here is the application:  To be faithful to the word of God means, in part, submitting yourself to the oversight and shepherding of a local, visible church wherein there are elders who labor in teaching and exhortation and who provide living examples of men who are attempting, albeit always imperfectly but not with egregious failings, to live out the Christian life before the body.

Every Christian should be part of such a church and every church should have such elders who teach the word and offer Christ-like rule within the body.

Q. 79:  What is the duty of such as are rightly baptized?

A:  It is the duty of such as are righty baptized, to give up themselves to some particular and orderly Church of Jesus Christ, that they may walk in all the commandments and ordinances of the Lord blameless.