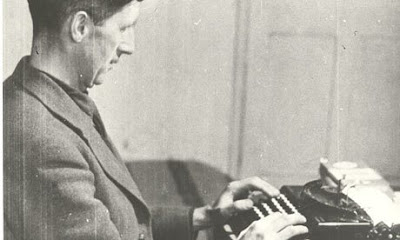 Of late, I’ve been reading though a collection of essays by George Orwell.  In one of those essays titled “Politics and the English Language” Orwell offers his six rules for effective writing:

(i) Never use a metaphor, simile or other figure of speech which you are used to seeing in print.

(ii) Never use a long word where a short one will do.

(iii) If it is possible to cut a word out, always cut it out.

(iv) Never use the passive where you can use the active.

(v) Never use a foreign phrase, a scientific word or a jargon word if you can think of an everyday English equivalent.

(vi) Break any of these rules sooner than say anything outright barbarous.
Posted by Jeffrey T. Riddle at 8:12 AM

Rephrased to emphasize the positive:

(1) Eliminate common figures of speech which you often see in print, such as familiar metaphors and similes.

(2) Use short words in place of long ones.

(3) Be succinct. Say as much as needed in as few words as possible.

(4) Use the active voice whenever possible.

(5) Use commonplace equivalents for all foreign phrases, scientific terms, or jargon.

(6) Break any of these rules in preference to writing something that does not conform to classical standards or accepted usage of the English language.

MJ, interesting "positive" spin. Though there's much I don't have in common with Orwell (aka Eric Arthur Blair) given that he was a socialist and a religious skeptic, I do admire his ability to write in such a thoughtful and engaging way, which inspires me to want to write better.