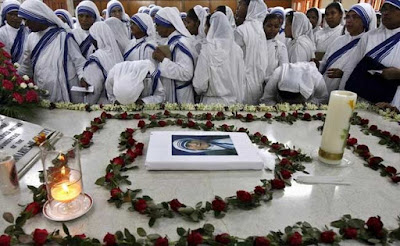 We have an altar from which those who serve the tabernacle have no right to eat (Hebrews 13:10).

For here we have no continuing city, but we seek the one to come (Hebrews 13:14).

In v. 10 the inspired author declares, “We have an altar….”  What did he means by this?  Why does he say it?  I think we have to imagine there were Jewish apologists who were working on these Jewish Christians to attempt to have them deny Christ and return to their old religion.  In this way, they would have been anti-evangelists.  Of course, no one who is ever truly converted will ultimately fall away (cf. John 10:27-29; Rom 8:38-39; Phil 1:6).

So, perhaps these Jewish apologists were saying:  "Look, we have the temple.  It sits there as a tangible object in the city of Jerusalem.  And we have an altar upon which sacrifices are offered for our sins."

As I read this I thought of the news that this weekend the Roman Catholic church will announce that Mother Theresa is now a "saint" (an unbiblical concept since all Christians are saints; you are made one of the saints the moment you are converted—you do not have to wait for church approval!).  I heard a news report of two persons who claim to have been healed after they prayed to Mother Theresa (another unbiblical concept since prayer is directed to God alone and needs no merely human mediator).  The desire to have a saint, like the desire to have a physical altar is a desire to have the visible, the physical, the tangible.  But it sets up an idol.  This is why the second commandment forbade graven images.  The danger is that one might focus on the object rather than upon the Lord himself.  This comes from Christ not being enough, but of needing more.

But listen as the inspired author says, “We [Christians] have an altar…”  What did he mean?  Did the early Christians have a physical altar stashed away somewhere?  No, he is talking about Christ.  The altar was the place where the offerings were laid.  What he is saying is that in Christ an offering was made for our sin once for all.  Christ is our altar!  He says this in much the same way that Paul in 1 Corinthians 5:7 says, “For even Christ our Passover is sacrificed for us.”  I can imagine someone asking Paul:  “Hey, Paul, why do you Christians no longer celebrate the Passover?”  And I hear Paul saying:  “We have a Passover.  Our Passover is Christ.”

The inspired author later adds:  “For we have no continuing city, but we seek one to come” (v. 14).

This takes us back to Father Abraham and mother Sarah in the faith hall of fame (see 11:13-16).  Like them, we too are homeless.  We are ex-pats.  We are men without a country.  We are living away from our true land.  But we are seeking it.  And one day it is coming to us.  Till then we must stand with Christ and persevere.

So, we are always confident, always cheerful, always glad in Christ, never flagging in zeal.  So, we will not drop out.  We will not give up.  We do not have a physical temple.  But we have something better, something more beautiful in its sheer simplicity and truth.  We have an altar:  The Lord Jesus Christ.  He died for us.  He was raised for us.  He lives for us.  He is coming again for us.

Grace and peace, Pastor Jeff Riddle
Posted by Jeffrey T. Riddle at 7:56 AM

A good friend of mine was a Benedictine monk for 30 years, and now truly Christian. He knew a nun who served under Theresa and had nothing good to say of her the most sadistic person she had ever known.
Not everyone the world celebrates is evil, but, it is the usual case as Jesus pointed out.