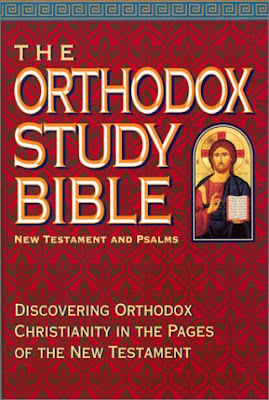 The Orthodox Study Bible (Thomas Nelson, 1993) presents commentary on the NT and the Psalms, prepared by the Academic Community of St. Athanasius Orthodox Academy of Santa Barbara, California. The text for the NT is from the New King James Version.   The traditional ending of Mark is included as the authoritative, un-bracketed text.  In the commentary notes, there is the following note at Mark 16:9-20:

Some manuscripts do not include this longer ending. Later traditions testify to several endings. The Church, however, has always regarded this ending as canonical and inspired (p. 129).

Some people in the Orthodox Church produced also a new translation of the New testament based upon de Patriarchal Greek Text.

many test editions of this translation were avaliable on the site http://www.orthodoxanswers.org.

this translation contains a very interesting Introduction about textual criticism (they removed also some little criticism about the KJV in this pdf).

Thanks VLB for your commment and for this information. I'll check out the introduction. JTR

I see the PDF has some lacunae but you can purchase a self-published hard copy online. Since this new translation is apparently not widely in print, I wonder what version English-speaking Orthodox use. I assume the KJV and the NKJV.

I also see that the 1904 Patriarchal Text is available online: http://www.goarch.org/chapel/biblegreek