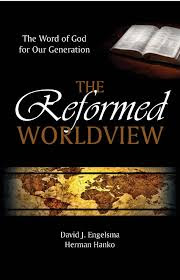 David J. Engelsma and Herman Hanko, The Reformed Worldview: The Word of God for Our Generation (British Reformed Fellowship, 2012): 142 pp.

Over the weekend, I finished reading this collection of essays by Engelsma and Hanko, retired professors at the Protestant Reformed Theological School (Wyoming, Michigan) on the theme of a Reformed worldview. The booklet was expanded from lectures given by the authors at a 2010 conference of the British Reformed Fellowship (BRF).

The chapters (and authors):

In these articles one finds many of the distinctive emphases of the conservative PRC denomination (a group of Dutch Reformed churches that separated from the mainstream Christian Reformed denomination in 1924 under the leadership of Herman Hoeksema), including rejection of “common grace” (ch. 1), rejection of easy divorce and absolute ban on remarriage after divorce (ch. 5), and preference for the King James Version (ch. 7). I was stuck by the eschatological perspective, rejecting both optimistic post-millennialism and pre-millennialism and anticipation of a Roman “one-world government,” with which I was less familiar.

Each chapter is relatively brief, pious, well-written, and devotional. I found Hanko’s discussion of sin (ch. 2) and personal holiness (ch. 8) to be especially intriguing.

Note: If you visit the BRF website (here), you can find other books by the authors, which I assume have also come from past conferences, including a free pdf of their book The Five Points of Calvinism (look here).