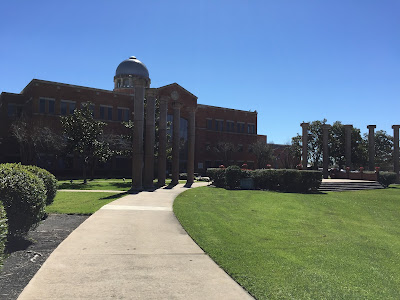 Image:  Scene from the campus of Houston Baptist University

Note:  DV, I will be attending the annual Theology Conference at Houston Baptist University again this year and doing another paper.  Had a great time at the 2016 conference.  The 2017 conference theme is "How the Bible Came into Being."  Below is the abstract for this year's paper which I will hopefully complete between now and then. Some may recognize a familiar theme.

The Ending of Mark as a Canonical Crisis
Abstract:  Short Paper Proposal
HBU 2017 Theology Conference:  How the Bible Came Into Being
March 2-4, 2017

This paper will examine the ending of the text of Mark as an issue in canon criticism.  The ending of Mark is one of most disputed texts in the New Testament.  This was acknowledged by the fourth century Church Fathers Eusebius and Jerome.  The Longer Ending of Mark (Mark 16:9-20) eventually predominated in the Greek Majority Text and was thus incorporated into the early printed editions of the Greek New Testament and in the vernacular translations based on the Textus Receptus.  With the rise of modern text criticism in the nineteenth century, weight was given to the uncial manuscripts Vaticanus and Sinaiticus, both of which end at Mark 16:8.  The reigning scholarly opinion suggested that Mark 16:9-20 was not the original ending of Mark but a secondary composition intended either to complete the unfinished Gospel or as a substitute for a lost ending.  In the twentieth century, some scholars began to suggest that Mark had, in fact, originally intended to end the Gospel at Mark 16:8 and that Mark 16:9-20 was not only secondary but spurious, uninspired and non-canonical.  The modern critical editions of the Greek New Testament began to bracket the Longer Ending and to include other textual alternatives, including the so-called Shorter Ending of Mark (after Mark 16:8)  and the Freer Logion (after Mark 16:14).  Some modern English translations have followed suit.  These include the Revised Standard Version, the New Revised Standard Version, the English Standard Version and the New Living Translation.  This paper will suggest that these changes have ignited a contemporary canonical crisis not seen since the fourth century.  Contemporary Christian readers, pastors and teachers are left with uncertainty as to the canonical text of Mark.  Finally, this paper will argue that this canonical crisis should be addressed and solved by reaffirming Mark 16:9-20 as the canonical text and fitting ending of Mark.