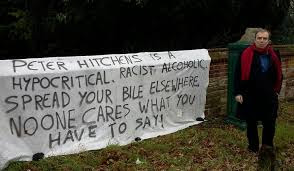 Image: Peter Hitchens stands by a less than friendly banner.

How about another Hitchens’ taken on the King James Version?

Christopher Hitchens’ younger brother Peter Hitchens is something of the polar opposite of his atheistic brother. Peter Hitchens is a self-identified Anglican Christian and a political conservative.  The brothers agree, however, in their admiration of the King James Version.  In the same year that Christopher Hitchens wrote his article in Vanity Fair on the KJV, Peter also wrote an article in the Daily Mail (January 6, 2011) on the AV titled “The King James Bible Versus the Sid James Bible.”

He writes the article in light of the beginning of the celebration of the 400th anniversary of the KJV (in 2011).  Despite the celebration, Hitchens laments the decline of the KJV’s regular use in favor of modern translations, dubbed the “Sid James Version.”

Why the “extirpation of this mighty cultural treasure”?  Hitchens says the answer is to be found in “the extraordinarily fierce and bilious anti-religious vituperation” of our times. He further notes that there have been two generations brought up to believe that no one can tell them what to believe or how to live.  These persons “can tell within minutes of encountering the Authorized Version of the Bible, that it is their enemy’s weapon.  This is because it is not simply a translation, but a poetic translation, written to be read aloud to country people in large buildings without loudspeakers, to be remembered, to lodge in the mind and to disturb the temporal with the haunting sound of the eternal.”