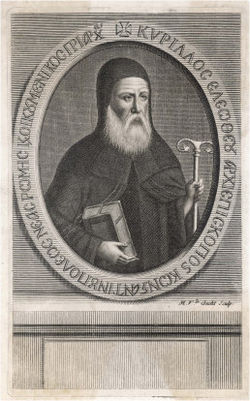 Since my oldest daughter is serving now in the Peace Corps in a nation that is predominantly Eastern Orthodox, I have been trying to do some reading and studying on this branch of the Christian tradition (which I am sure they would see as the root!).

To this end, I’ve been reading John Anthony McGuckin’s The Orthodox Church:  An Introduction to its History, Doctrine, and Spiritual Culture (Wiley-Blackwell, 2011), which my daughter gave me as a Christmas present, BTW.

With my parallel interest in the text of Scripture, among the first sections I turned to in the book were those on Scripture and tradition.   I have not found McGuckin extremely helpful here, but in his discussion of “symbolical books” (collections of authoritative doctrinal and liturgical sources) he says some interesting things about the Reformation and an apparently Calvinistic patriarch named Cyril Lukaris (1572-1638).  Here is McGuckin:

[The symbolical books] were predominantly put together in the sixteenth and seventeenth centuries, when the effects of the Protestant Reformation were being dimly felt to impinge on life in the Eastern churches….  One of the central texts in the list was the result of the explicit impact of the Reformation.  One of the seventeenth century patriarchs of Constantinople, Cyril Lukaris, had issued a statement of faith which many at the time believed had moved towards being an implicit endorsement of Calvinism.  It caused considerable alarm among the Orthodox (pp. 111-112).

He proceeds to describe how this resulted in the synod of Jerusalem in 1672 defining the Orthodox response to Protestantism.

A quick look at that intrepid source, Wikipedia, notes how Cyril Lukaris’ Calvinism was opposed, and he was eventually, yet apparently unrelatedly, assassinated by strangulation on the orders of the Ottoman Sultan and later came to be venerated in modern Orthodoxy as a Hieromartyr (priest or bishop-martyr).

One wonders what might have been if Reformed theology had gained a foothold in Orthodoxy or if there are any pockets of it still….

Very important article Jeff! I was thinking in write something about Luccaris some months ago (and this ideia is still with me). In my opinion, Luccaris was an important theologian that tried to do a "silence reformation" in the Eastern Orthodoxy. Of course, this ideia is disputed, but his association with Calvin are too high, also the confession of faith that he wrote tends to this direction.

VLB, thanks for the comment. I was not aware of Lukaris but hope to read more. I'd like to read his "Confession" also. I hope you do that article. Send it to me *when* you finish so I can learn more.

His confession is avaliable on-line Jeff, here is of the links: http://www.crivoice.org/creedcyril.html

The Trinitarian Bible Society will publish a revision of the Lucaris' Bible in modern Greek soon, replaced Bambas' version.