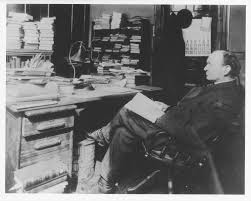 Image:  A. T. Robertson at his desk at Southern Seminary

I’m continuing to work my way through A. T. Robertson’s An Introduction to the Textual Criticism of the New Testament.

In chapter two on The Critical Text (pp. 28-40), Robertson describes the demise of the Textus Receptus and the corresponding rise of the critical text.  Interesting to see his confidence in the “restorationist” view of text criticism, as it stood in 1925.  What would Robertson make of the modern academic text critical abandonment of this confidence?

In a more round-about way he lays out three eras of text study:

First, the foundational period (pre-1750). The main work was done by Mill, Bentley, and Bengel.

Third, the critical period (post-1830).  Citing Souter, Robertson says this period is marked by strife between those who “blindly” hold to the Textus Receptus versus those determined “to secure the most ancient witnesses they could and to trust them” (p. 29).

He adds: “In the third period the bondage of the Textus Receptus is broken and the triumph of the critical text is won” (p. 29).

One of the heroes is Lachmann and his 1831 Greek NT, which for the first time broke with the TR.  Of Lachmann:

“He did not so reverence the Textus Receptus that he was afraid to publish his own text” (p. 30).

“His idea was to restore the text of the oldest manuscripts, that is the text of the fourth century, rather than the original text, but to make a definite start and to get away from the tyranny of the Textus Receptus” (p. 31).

Westcott and Hort then produce in 1881 “the greatest edition ever published” (citing Souter, p. 35).

“This is the purpose of Westcott and Hort, to restore the original text, as far it is possible to do so” (p. 37).

It's very interesting to note a kind of anger in Robertson's writings concerning the Textus Receptus. We can see algo an pursuit to be in line with the academic tendencies of the time (something that continues to happen today).

VLB, yes, there is an overt animosity to the TR. It holds others in "bondage" and exercises "tyranny." I noted in the previous post how Robertson said some positive things about the TR, but I suspect he did that to placate conservatives. 1925 was the height of the fundamentalist-modernist controversy in America. It was also the year the Southern Baptist Convention approved their first convention-wide confession of faith: The Baptist Faith and Message (1925). Moderate men in the SBC, like E. Y. Mullins at SBTS, kept this confession broad enough for latitude in interpretation. You get the sense that Robertson was well trained in "double-speak": applauding the TR one moment and denouncing it the next.