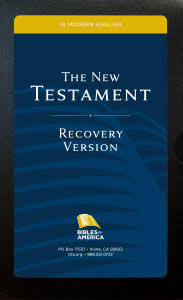 I just recorded and posted WM # 70: Review: Recovery Version Bible. Below are my notes for this episode:

I recently had someone ask me about the “Recovery Version” Bible. I told her I was not familiar with this Bible and would do some research and get back.

At first, I thought she might have been speaking about an evangelical study Bible (using the NIV or some other modern translation) that had notes devoted to addiction recovery (like the NIV Celebrate Recovery Study Bible or the Life Recovery Bible NLT).

A little more looking, however, and I soon found out that the “recovery” in the title did not have to do with addiction but recovery or restoration of primitive Christianity.

I discovered that the Recovery Version of the Bible is produced by Living Stream Ministry (I’ll refer to the Recovery Version Bible as RVB and the Recovery Version New Testament as RVNT), connected with and publishers of Watchman Nee and Witness Lee. Watchman Nee (1903-1972) was a dynamic Chinese teacher who founded an independent “local church” movement that has spread to several other Asian and Western (including the US) nations. I had heard of Nee before and had seen a few of his books on the shelves of Christian bookstores. Witness Lee (1905-1997) was Nee’s protégé who became a leader in the movement and Nee’s successor at his death. Lee was apparently the general editor of the RVB.

I wanted to look at a copy of the RVB. The NT can be found online here. I found this rather odd note, however, on the opening page:

We hope that many will benefit from these spiritual riches. However, for the sake of avoiding confusion,
we ask that none of these materials be downloaded or copied and republished elsewhere, electronically or otherwise.
Living Stream Ministry retains full copyright on all these materials and hopes that our visitors will respect this.

So, readers can view the text online but “for the sake of confusion” the material cannot be “downloaded or copies and republished elsewhere, electronically or otherwise”? This is odd.

A quick Google search for “Living Stream Ministry” brought some interesting information, including several sites which raised questions about the theology of Nee and Lee, and the practices of their church movement.  Findings included this “open letter” signed by 70 mainstream evangelical Christian leaders and this 2007 press release about this open letter. The concerns expressed in the open letter center on four areas in the teaching of Witness Lee: (1) doctrine of God (especially the Trinity and Christology); (2) the doctrine of man; (3) the doctrine of the church (“the legitimacy of evangelical churches and denominations”); and (4) lawsuits with evangelical Christians.

Citations are given from Lee’s writings to illustrate concerns.  With regard to the doctrine of the church, the charge seems to be that Lee has disparaged the legitimacy of Christian churches outside his own movement.  Among passages cited are those from the RVNT on Mark 16:18 (describing “apostate Roman Catholic and Protestant denominations”) and Revelation 3:8 (describing the “apostate church … denominating herself”).

The “local church” organization (I’ll call it the Living Stream Ministry Church, LSMC), then, appears to a restorationist movement, with questions about the legitimacy of other churches, and especially denominations, outside their circle.

I also visited the website for the LSMC in Charlottesville, which modestly calls itself “The Church in Charlottesville.”  The picture on the opening page looks like it came from a retreat and shows it to be a group primarily consisting of young people (I would guess many are students at UVA or elsewhere), with many Asians or, possibly, internationals.

The doctrinal statement has 8 bullet points and seems to reflect a general non-denominational, Arminian evangelicalism theology.

The FAQ page notes that they do not belong to a denomination but have fellowship with other churches (presumably, however, only with other LSMC churches). It also notes their exclusive use of the RVB and speaks in glowing terms of Nee and Lee, even comparing Nee to Wycliffe, Tyndale, Luther, Bunyan, etc. It is interesting that there is no explicit listing of the names of any church officers (pastors, elders, deacons), though it is noted that the church treasures “apostles, prophets, evangelists, and shepherds and teachers (Eph. 4:11).” Do they believe that the office of “apostle” still exists today?

Getting a hard copy of the RVB

After reading the online copyright note for the NT and wanting also to read the OT of the RB, I thought I might try to order a hard copy. On Amazon I discovered that the entire RB is quite expensive ($129 for the hardback and $99 for the softback!), though there were less expensive paperback versions of the NT alone.  I also discovered that Living Streams will send a free copy of the NT, so I requested one and got it in the mail about a week later.

This review comes from my examination of that text.

A Brief Review of the RVNT

As we will see the RVB is really a study Bible with copious notes, written by Witness Lee giving the LSMC interpretation. This review will not be extensive but suggestive of the content.

First, the front matter and introduction (“A Brief Explanation”):

The title page says the text was translated by The Editorial Section of Living Stream Ministry.

It adds that the outline, footnotes, charts, and references were written by Witness Lee.

The print version also has a copyright warning against transmission in any form without permission.

The first edition was printed in 1985 and the revised edition in 1991.

In the “Brief Explanation” it is noted that the RVNT “attempts to avoid biases and inaccurate judgments.”  It is also states that a proper translation requires not only a proper understanding of “the original language” but also “the divine revelation in the holy Word.”

It has a high view of the RVB noting it is the apex of past study and understanding. Both the translation and the notes are the “consummation” and “crystallization” of two thousand years of previous study.

In its desire to recover “the original Greek text” it makes used of the NA 26th edition of the Greek NT, with some departures.

My surface impression is that just as the text is "mixed" (with TR and modern critical text readings) so the translation is "mixed," in that it combines Tyndale/KJV and modern readings.

Each book is preceded by an extended outline. The notes are extensive, often swallowing up and eclipsing the text. One might well call the RVNT a NT commentary that provides the text of the Bible, rather than a study Bible.  Given that this is the only approved translation for use in LWMC churches one wonders why there is not more confidence in simply printing the text of the Bible itself without the extensive notes. 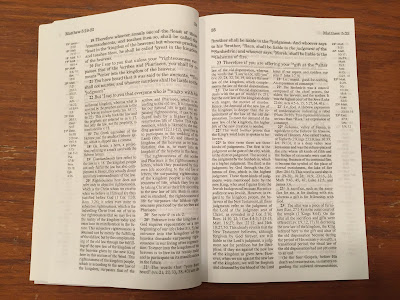 Image: sample pages from the RVB showing proportion of text (above) to notes (below).

Problems with notes relating to ecclesiology at Matt 16:18 and Rev 3:8 are cited above.

Another major issue with the notes and accompanying charts is the dispensational pre-millennial theology reflected in them. With dispensationalism also comes other issues like the law, the church, etc. 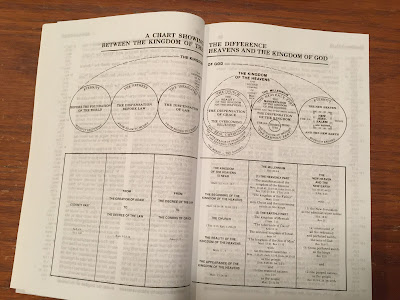 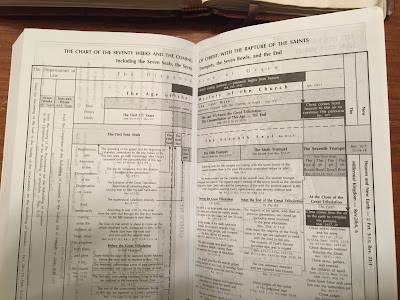 Image: a chart on eschatology from the RVNT

Though it has existed since 1985 I was unaware of the RVB until this year. As the review indicates, I do have some serious concerns about this translation and cannot recommend its regular use. It has a mixed text in the NT and I am not in agreement with the theological viewpoint of the notes. I also do not think it would be safe to attend a church that would require exclusive use of this translation of the Bible.

Note: After completing my review, I also ran across these two reviews of the RVB by Murray Grindlay.
Posted by Jeffrey T. Riddle at 11:44 PM

There is recovery version of bible without footnote printed and available for purchase. I saw it before.

And as far as I am aware of, they allow people use any kind of versions of bible in their gathering.

Anon, thanks for your post and for this info. They may have Bibles printed without the notes, but I suppose that the notes reflect the teaching perspective of the leaders in this movement.

you must search more, Jeffrey.

Jeffrey, you must meet with the church and you will discover more. do not be limited in your superficial observation