Word Magazine #71: Was Jesus a Rabbi? 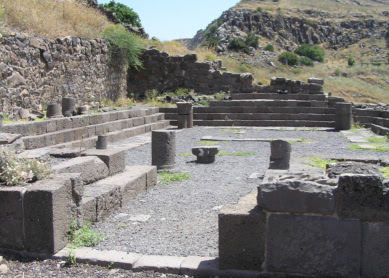 Image: Remains of a first century synagogue at Gamla in the Golan Heights.

The Hebrew/Aramaic term rabbi (“teacher”) or rabbouni/rabboni (“my teacher”) is used several times in the canonical Gospels in reference to Jesus. This usage, however, is not necessarily always positive.

Jesus described as a “rabbi” in the Gospels:

In Matthew Jesus is twice referred to as rabbi (Matt 26:25, 49), but the speaker is Judas Iscariot. In Matthew 23:7-8 Jesus chides those who are greeted in the marketplace by the term and instructs his followers not to seek to be called by this title, since they have only one Master (kathegetes) who is Christ.

In Mark Peter twice calls Jesus rabbi, once when he asks if he might build three tabernacles on the Mount of Transfiguration (Mk 9:5) and again when he asks Jesus about the cursed fig tree (Mk 11:21). Aside from Peter, the only other reference to Jesus by this term comes from Judas (14:45). The blind man Bartimaeus also calls out to Jesus using the term Rabboni (10:51).

The term does not appear at all in the Gospel of Luke, perhaps reflecting the Gentile Roman audience for this Gospel.

On the Education of Jesus:

Of his education, we know nothing, and can only surmise that he learned Hebrew, studied the Hebrew Scriptures intently, and listened to religious teachers, from whom he learned such forms of teaching as parables and aphorisms (p. 30).

On Jesus as a Rabbi:

In Jesus of Nazareth Gunther Bornkamm points to the fact that Jesus is presented as a teacher and one whose judgment is sought in disputes about the law “corresponds with the picture of the Jewish rabbi, who is a theologian and jurist at the same time” (p. 96). There is never any mention of Jesus studying with a well-known rabbi (contrast Paul’s claim to have studied at the feet of Gamaliel in Acts 22:3). John records the Jews scoffing at Jesus, “How knoweth this man letters [grammata], having never learned [particle from manthano]?” (John 7:15). Mark, likewise, records that when Jesus began to teach in the synagogue in his home country “many were astonished, saying, From whence hath this man these things?” (Mark 6:2).  Bornkamm, however, notes:

Meanwhile, we must not without further examination read back into Jesus’ time the strict regulations of later rabbinical literature for study and ordination of the scribes. Certainly the respectful title “Rabbi” with which he is addressed is applied rightly (p. 96).

In The New Testament and Antiquity, the Gary Burge and his co-authors ask, “But was Jesus a sophisticated teacher?” to which they reply:

Some scholars have a romantic view of him as a rural village carpenter who offered pithy and simple insights about God. Jesus was indeed a craftsman, but rabbis commonly held such practical jobs. Paul was a tentmaker, and the famous rabbi Shammai was a stonemason. The Mishnah described the law as a “crown,” worn by the teacher, but it could be used to glorify oneself or to gain profit. Instead the rabbi was to have an occupation through which God granted the means to teach (Mishnah, Aboth 4:5) (p. 148).

They also point out that the leading rabbis of the first century were not known by the books they produced but by the number of students (talmid) they attracted. The leading rabbis of Jesus’ day, including Johannan ben Zakkai, Gamaliel, Hillel, and Shammai, like Jesus, left no writings behind, but their teaching was written down and transmitted by their disciples (p. 149).

Jesus might have been considered a rabbi by some of his Jewish contemporaries due to his natural teaching ability and personal authority, even if he did not formally train at the feet of a well-known rabbi. Still this is not a preferred term for Jesus in the Gospels.  It is also not a term used by Christians in the post-resurrection period to refer to him. Perhaps this came about due to Jesus’ own sometimes harsh critique of the teachers of his day and from the desire to differentiate his movement from that of mainstream early Judaism.