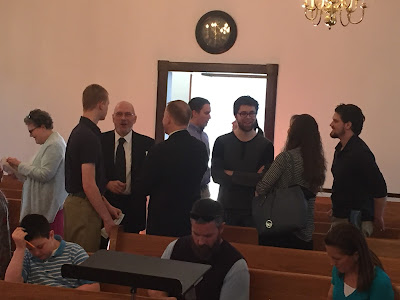 Ecclesiastes 8:12 Though a sinner do evil an hundred times, and his days be prolonged, yet surely I know that it shall be well with them that fear God, which fear before him: 13 But it shall not be well with the wicked, neither shall he prolong his days, which are as a shadow; because he feareth not before God.

In Ecclesiastes 8:12-17 Solomon offers comfort and consolation to believers.

One’s first thought in interpreting v. 12 might be that the sinner who does evil a hundred times (v. 12a) is identical with one who fears God (v. 12b).

But rightly to divide this verse we must look at its context. The previous verses had been speaking about how sinners boldly persist in their rebellion against God. Sinners mistake God’s patience and longsuffering for indifference (or even non-existence). Since there is often no immediate punishment for sin in this temporal life, they think God must not care, and it emboldens them in their godlessness (see Ecc 8:11). Verse 12 is a continuation of that thought.

“Though a sinner do evil an hundred times….” This is hyperbolic language. The point is not that God will punish him on the one hundred and first occasion of sin! Rather: Though a sinner lack conformity unto or flagrantly transgresses the law of God a hundred times, scores of times, thousands of times….

“and his days be prolonged.” This is another reference to the fact that sometimes wicked men live to be old men and die peacefully in their sleep never receiving temporal punishment for their sins (cf. Ecc 7:15).

In the light of these most obvious injustices that even the dullest observer of this sinful world can easily record, Solomon reminds believers that they are not to be unsettled or disturbed by such things.

Instead, he declares: “yet surely I know that it shall be well with them that fear God, which fear before him” (v. 12b).

I am struck first by the certainty of Solomon’s statement.  It is not, “I am fairly confident…”, or “I am almost completely persuaded…”,  or “I am pretty sure….” He speaks with confidence: “yet surely I know….” This is not weak kneed wavering! Bridges: “This is no bare conjecture or probability…. The firm conviction is wrought in the heart by the Spirit of God enabling us to rest confidently on the word” (Ecclesiastes, p. 203).

Of what does he have this certainty? That God will act with goodness (benevolence) toward those who fear him.

A contrast is made in v. 13: “But it shall not be well with the wicked…..” Do not think that just because wicked men might enjoy worldly success and temporal blessings in this life that the Lord is indifferent to their wickedness.

Solomon continues, “neither shall he prolong his days, which are as a shadow.” His temporal existence will not go on forever. One day he will go the way of all flesh and there will be nothing he can do to avoid it.  This present life is like a shadow. It is not the ultimate reality but merely portends that which is to come.
And why is this man placed in the category of the wicked? Solomon tells us: “because he feareth not before God.” He has no awe, no reverence for God (cf. Psalm 36:1; Rom 3:17).
These opening two verses teach us a Biblical truth which the world finds unpleasant and would rather not hear.  It is the truth that not everyone goes to heaven. We are not saved by virtue of existence. It is a rejection of universalism.
No, it tells us that, in the end, there are only two categories of men: there are those who fear God and there are the wicked (those who do not fear God). And there are two different destinies or ends: there are those with whom it will be well with God and those with whom it will not be well (cf. John 3:36; Matt 10:32-33).
Solomon is saying: Don’t be fooled by the mirage of this world’s circumstances. Think of what will be ultimately important.
In the previous passage we talked about men exercising discernment (cf. 8:5b). But in this passage, we are being told that God himself is discerning.  He will not forget to give good to his saints, even if they lack what seems to be good in this life. Nor, will he forget to administer justice to the wicked, even if it seems in this life that he is overlooking it.


Grace and peace, Pastor Jeff Riddle
Posted by Jeffrey T. Riddle at 11:23 AM