Book Note: Ibn Warraq, "Why I am Not a Muslim" 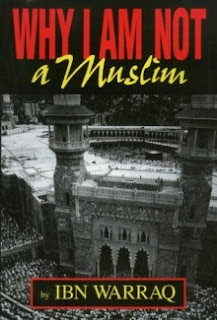 Ibn Warraq (a pseudonym, meaning “son of a papermaker”) is a Pakistani former Muslim and now secular thinker who has become a leading critic of Islam. He wrote this book in 1995 in response to threats against Salman Rushdie and what Warraq believed was a failure among Westerners, in particular, to defend free speech and to critique Islam.  You can watch a video of Warraq sharing his personal story, while doing a talk on “Why I am Not a Muslim” here.

Warraq offers a sometimes scathing rationalistic, Enlightenment-influenced review of Islam, covering the historic roots of the movement, the life of Muhammed, the Koran and hadith, Muslim theology and practice, the view of women in Islam, and Muslims in the West, among other things. Warraq writes as a religious skeptic, a modern David Hume, rather than as a Christian apologist.  Indeed, he is just as skeptical of Christianity as he is of Islam. The back cover has endorsements from the likes of Christopher Hitchens and Anthony Flew.

Though Warraq says he is not “a scholar or a specialist" (xv), the book has a scholarly feel to it, with numerous references to primary and secondary works on Islam.  Like the works of another former-Muslim Ayaan Hirsi Ali, perhaps the most intriguing thing about the book is that is written by someone who knows the theology and practice of Islam from firsthand experience and finds it wanting.

Here are some gleanings from Warraq’s book:

Assassinations, murder, cruelty, and torture must all be taken into consideration in any judgment on the moral character of Muhammed (p. 99).

The doctrine of abrogation [the Muslim view that some verses in the Koran are superseded by later verses] also makes a mockery of the Muslim dogma that the Koran is a faithful and unalterable reproduction of the original scriptures that are preserved in heaven. If God’s words are eternal, uncreated, and of universal significance, how then can we talk of God’s word being superseded or becoming obsolete? Are some words of God to be preferred to other words of God? Apparently yes. According to Muir, some 200 verses have been cancelled by later ones. Thus we have the strange situation where the entire Koran is recited as the word of God, and yet there are passages that can be considered not “true”; in other words, 3 percent of the Koran is acknowledged as falsehood (p. 115).

Muhammed was not a systematic thinker, and it is futile to look for a coherent set of principles in the Koran (p. 334).

On Islam and Monotheism:

Far from raising the moral standards of the Arabs, Islam seems to have sanctioned all sorts of immoral behavior (p. 116).

Enough has been said to show that such a system [Islam] is as rich and superstitious as any Greek, Roman, or Norse polytheistic mythology (p. 117).

The Muslim doctrine of the Devil also comes close at times to ditheism, i.e., the positing of two powerful Beings (p. 118).

Hence in my view, there is no difference between Islam and Islamic fundamentalism. Islam is deeply embedded in every Muslim society, and “fundamentalism” is simply the excess of this culture (p. 185).

Although Europeans are constantly castigated for having imposed their insidious and decadent values, culture, and language on the Third World, no one cares to point out that Islam colonized lands that were the homes of advanced and ancient civilizations, and that in doing so, Islamic colonialism trampled under foot and permanently destroyed many cultures (p. 198).

On Islam and Slavery:

Slavery in the Islamic world continued, astonishingly enough, well into the twentieth century…. There is enough evidence to show that slavery persisted in Saudi Arabia and the Yemen up to the 1950s. Slavery was so deeply rooted in these countries that abolition was a very slow process. It was due to foreign influence that the process began at all. Islam …. has never preached the abolition of slavery as a doctrine…. (p. 205).

On Women and Islam:

To see Islam as sex-positive is to insult all Muslim women, for sex is seen entirely from the male point of view; a woman’s sexuality, as we shall see, is either denied … or seen as something unholy, something to be feared, repressed, a work of the devil (291).

Modern reformist Muslim intellectuals—male or female—when confronted by the apparent backwardness of the position of women (a situation which has remained stagnant for centuries) have tended to invent a mythological golden age at the dawn of Islam when women putatively enjoyed equal rights….  These same Muslim thinkers, when faced by the textual evidence of the inherent misogyny of Islam, are confused and anguished…. The reformists cannot win on these terms—whatever mental gymnastics the reformists perform, they cannot escape the fact that Islam is deeply antifeminist… Islam has always considered women as creatures inferior to men in every way: physically, intellectually, and morally (p. 293).

On Islam and freedom:

No Muslim country has developed a stable democracy; Muslims are being subjected to every kind of repression possible. Under these conditions healthy criticism of society is not possible, because critical thought and liberty go together (p. 294).

But multiculturalism is based on some fundamental misconceptions. There is the erroneous and sentimental belief that all cultures, deep down, have the same values; or if these values are different, they are equally worthy of respect. Multiculuralism, being the child of relativism, is incapable of criticizing cultures, of making cross-cultural judgements. The truth is that not all cultures have the same values, and not all values are worthy of respect (p. 356).