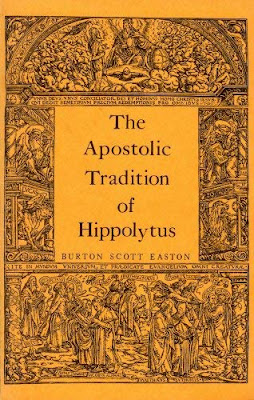 This week I have been reading through Burton Scott Easton’s translation, notes, and commentary on The Apostolic Tradition of Hippolytus (Cambridge University Press, 1934, 1962), which Easton describes as being in the genre of an early Christian book of “Church Order” (like the Didache, the Didascalia, etc.).

Easton dates the work to c. 217 and traces the history of the text and his efforts to reconstruct it. This includes making use of copies of the original Greek text of the Apostolic Tradition, which exists only in fragments, and versional witnesses to it in Latin, Ethiopic, Sahidic Coptic, and Arabic.

At the close of his introduction to the work Easton summarizes his findings on the text, beginning, “The original Greek of the Apostolic Tradition has not been recovered, except in small fragments” (31). He concludes, “Under these conditions the restoration of a really accurate text is manifestly impossible”, adding, however, “None the less the material is abundant and independent enough to warrant confidence in the substance and in most cases the original wording of Hippolytus’s rules have really been preserved….” (31-32).

In other words, we cannot know the original with certainty, but we can be relatively sure we have a close approximation of what was originally written.

In his translation, Easton provides frequent footnotes in which he notes textual variants and describes his textual decisions. These notes serves as both a sort of textual apparatus and a textual commentary. Here we find notes like this, “The translation given follows no text precisely but represents what seems to be the most likely original form” (35). And this: “The restoration of sections 30-31 is conjectural” (59).

What struck me as I read these notes is how this same process of modern textual reconstruction had been applied not to an early non-canonical Christian work, but to the Bible itself.

I can stomach this method with an uninspired work like Hippolytus’s Apostolic Tradition. God never promised to preserve this type of work. But it seems spiritually dangerous to think the same can be applied to Holy Scripture. Yet, is that not what has been done in the modern text and translations, even by otherwise conservative evangelical and Reformed men? Add a half verse at Psalm 145:13b since it is in the Septuagint (so the ESV); remove the woman taken in adultery passage at John 7:53—8:11 and place it in the footnote, since it’s not in the “best” manuscripts (so the Tyndale House Greek NT); add a conjecture at 2 Peter 3:10 based on the newest computer models (so the Nestle-Aland 28th edition of the Greek NT), etc.

What’s the difference? I do not claim that the Apostolic Tradition is the Word of God, inspired and preserved by Him. I do not look to it as the authoritative standard for faith and practice. But I do expect this of Holy Scripture.