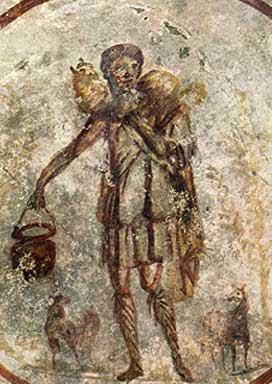 Image: Fresco in the Catacomb of Callixtus in Rome (c. third century), depicting Christ as the Good Shepherd.

This is an occasional series of readings from and brief notes and commentary upon Eusebius of Caesarea’s The Ecclesiastical History: Book 7, chapters 18-19. Listen here.

These chapters are interesting in that Eusebius describes early examples of Christian art and objects of religious devotion.

Chapter 18 describes a statue configuration at Caesarea Philippi, supposedly placed as a memorial at the home of the woman with the issue of blood who touched the hem of Jesus’s garment and was healed. Eusebius said it included a “lofty stone” at the gates of the woman’s house with “a brazen figure in relief of a woman” on bended knee stretching out her hands. Opposite of this figure was another of the same material depicting Jesus. Eusebius says, “This statue, they said, bore the likeness of Jesus.” Also growing at the foot of the statue of Jesus was an herb supposedly with healing powers. Eusebius claims to have seen these objects with his own eyes when visiting the city.

He also makes reference to other such objects, including colored painting depicting the apostles Paul and Peter, as well as Jesus himself, and he suggests that such things were according to “pagan habit.”

Chapter 19 describes the “throne (thronos) of James,” the brother of Christ and first bishop of Jerusalem as a religious object. Eusebius claims that this throne or seat had been preserved to his day and that the brethren gave honor to it. He mentions this approvingly seeing it as evidence of the esteem in which James was held both by the ancients and contemporaries.

These notes are intriguing in that they give evidence of the development of Christian visual art, as well as the veneration of religious objects. Eusebius himself sees it as related to pagan (rather than Jewish) tendencies, but he does not necessarily denounce it and even seems to offer approval. Such things will become matters of greater controversy in later years, including in the controversies over icons and other religious objects. Such controversies will continue even up to the Protestant Reformation and beyond.