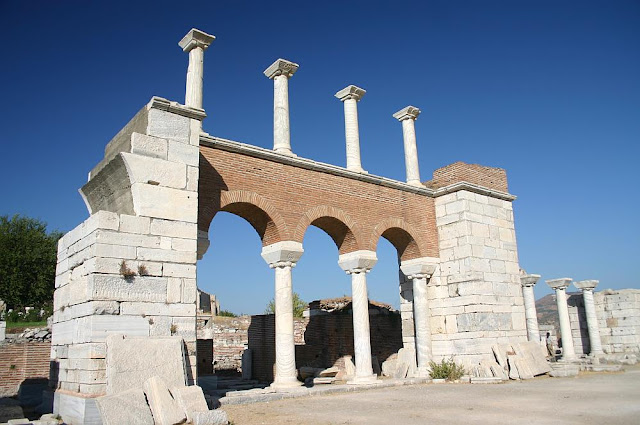 Image: Remains from the Basilica of St. John, ancient Ephesus, a church site that dates to the 4th century.

A new episode has been added to the series from Eusebius of Caesarea’s The Ecclesiastical History: book 3, chapters 21-23. Listen here.

Chapter 21: This brief chapter flows both imperial and ecclesiastical succession.
Among the emperors, Nerva was succeeded by Trajan.

In the church at Alexandria, the bishops, in order, were Annianus, Abilius, and Cerdo (in Trajan’s first year).

In Rome, after Peter and Paul: Linus, Anencletus, and Clement.

In Antioch, Evodius was followed by Ignatius.

In Jerusalem, “the bother or our Savior” [James] was followed by Simeon.

So, in chapters 21-22 we have the four great early Christian city centers: Alexandria, Rome, Antioch, and Jerusalem.

Chapter 23: This chapter presents traditions related to John, the “beloved disciple,” Apostle and Evangelist, who, after the death of Domitian and his release from banishment settled in Ephessus and became the administrator of the churches of Asia.

Two witnesses are cited for John’s life and ministry: Irenaeus and Clement of Alexandria.

From Irenaeus: “Now the church at Ephesus was founded by Paul, but John stayed there until the time of Trajan, and it is a true witness of the tradition of the Apostles.”

From Clement’s work “Who is the rich man that is saved” Eusebius shares an extra-biblical Johannine account, which he calls a “true tradition.”

It involves John’s ministry in Ephesus and the surrounding region and John’s  entrusting a young convert to the care of a bishop (Lake says another tradition says this was in Smyrna). The young man, however, was neglected after his baptism and became a robber. John returned and asked the bishop about the man. The bishop reported he was spiritually dead, but John sought him out and restored him.

Eusebius says he shares this account “both for the sake of the narrative and the edification” of his readers.