Eusebius, EH, 3.24: The Writings of the Apostle John 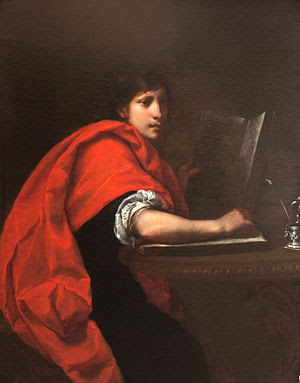 Another episode is posted to the series from Eusebius of Caesarea’s The Ecclesiastical History: book 3, chapter 24. Listen here.

In this chapter Eusebius, describes the writing of the apostle John, whose settlement in Ephesus, after his banishment at Patmos, had been noted in previous chapters.

He begins with the Gospel of John, noting that it is read “in all the churches under heaven.”

He accepts the tradition that it was the fourth and last Gospel written.

To explain why only two apostles wrote Gospels, Eusebius notes that they were “simple men in speech” and did not aspire to “to represent the teachings of the Master in persuasive or artistic language” but to rely on the Holy Spirit.

Eusebius says that John knew of the other Gospels and welcomed them, but that he wrote his Gospel to expand on the early ministry of Christ. The other Gospels, says Eusebius, only describe one year in Christ’s ministry, from the death of John the Baptist. He notes the significance of John’s statement in John 3:24: “For John was not yet cast into prison” [Richard Bauckham also calls attention to this verse in his article “John for Readers of Mark” in his edited work, The Gospel for All Christians]. So, Eusebius observes: “Thus John in the course of his gospel relates what Christ did before John the Baptist had been thrown into prison, but the other three evangelists narrate the events after the imprisonment of the Baptist.”

Eusebius also explains that John had no genealogy, because this had already been handled by Matthew and Luke.

He also makes reference to Matthew’s Gospel having been written for a Jewish audience and notes Luke’s introduction to his Gospel and how Luke had gained from “his profitable intercourse and life with Paul and his conversation with the other apostles.”

After his Gospel, Eusebius notes the acceptance, without controversy, of 1 John, but that 2-3 John were disputed, as was Revelation, with many conflicting opinions on it.