Eusebius, EH.3.5-6: Starvation during the Siege of Jerusalem 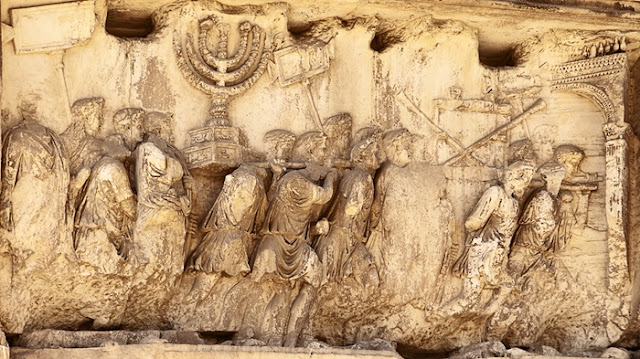 Image: Close-up of the Arch of Titus, Rome, constructed AD 82, depicting Roman looting of the Jerusalem temple in AD 70.

A new episode has been added to the series on Eusebius of Caesarea’s The Ecclesiastical History: book 3, chapters 5-6. Listen here.

This chapter focuses on the destruction of Jerusalem by the Romans in AD 70, as well as the horrendous sufferings undergone by the inhabitants of Jerusalem during the siege and before the fall of the city.

Josephus is used a source for much of the information.

In chapter 5 reference is made to a group of Christians in Jerusalem who were “commanded by an oracle” to flee the city before its destruction to settle in the city of Pella of the region Perea.

Eusebius sees the destruction of Jerusalem during the Passover season as a clear sign of this having been divine retribution for the crucifixion of Jesus.

In chapter 6 he describes the grotesque sufferings of those under siege in Jerusalem. These focus on accounts of hunger and starvation, that led to infighting and terrible acts of inhumanity. Not only did the beleaguered inhabitants begin to eat belts, shoes, and leather stripped from their shields, but they also turned to cannibalism.

The low point comes in the account of a woman named Mary of Bathezor, who, driven mad with hunger, killed, cooked, and ate her infant son.