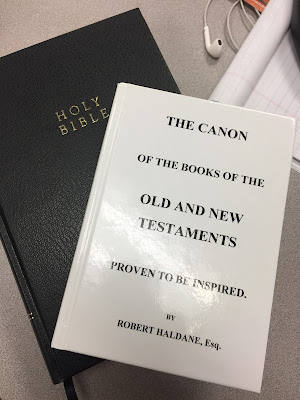 I continue to be helped by reading Robert Haldane’s The Books of the Old and New Testaments Proven to Be Canonical and Their Verbal Inspiration Maintained and Established (1830; Sprinkle reprint, 2014). Of note is Haldane’s insistence that canon and inspiration are vitally related doctrines.

At one point, Haldane discusses the suggestion made by some that parts of the NT are not of lofty enough content to be considered inspired. Among the passages challenged he lists Luke’s account of Paul’s ship wreck in Acts 27, Paul’s advice to Timothy to take some wine for his stomach (1 Tim 5:23), and his instructions to bring a cloak (2 Tim 4:13).

Haldane warns that those who think they can say some parts of the Scripture are inspired while others are not threaten to set aside “the paramount authority” and unity of the Word of God. If such “licentious principles of interpretation” were admitted, the humble Christian would be thrown into confusion as to “what portion of it he is to consider as from God, and what portion as from man” (115). Rejection of any passage as uninspired would make “the progress to the non-inspiration of whole books of Scripture perfectly easy and natural” (116). If one book would be uninspired, then all of Scripture would be “subverted” (116). Yes, for Haldane it is a slippery slope. Deny the inspiration of any single passage in the Bible and eventually one will deny the whole is inspired.

The discovery in like manner, of one single passage in Scripture not dictated by the Holy Ghost, would make void the declaration that “all Scripture is given by inspiration of God,” and would render inspiration necessary to tell us what part of it is inspired, and what is not. According to those writers who deny the doctrine of plenary inspiration we have not the pure Word of God; for much that we have under that designation is solely the word of man.

Let those who treat the Scriptures in this manner pause, and review the principles on which they are proceeding; and let them not perplex “plain Christians” with their rash and unhallowed speculations. The great body of believers receive, with implicit confidence, the whole contents of the Bible, as the oracles of God;—they venture not either to add to it, or to take from it. Convinced that it is the book of God, they treat even those parts of it which they do not understand with humble reverence... (116-117).

Though Haldane could not yet fully have imagined it in his day, one wonders what he would say now with the rise of modern text criticism. What would he say of modern translations that bracket passages like Mark 16:9-20 or John 7:53—8:11? How would Haldane assess those who claim that Jesus’ prayer from the cross, “Father forgive them; for they know not what they do” in Luke 23:34 is just a pious accretion and not part of the inspired text? Or those who reject 1 Corinthians 14:34-35, because it does not conform to their modern egalitarian sensitivities? Would he not ask by what special inspiration the critic now claims to distinguish between what is inspired and what it not? Would he not worry that the “plain Christian” who reads the editorial insertions and footnotes in his modern Bible will only become confused and perplexed by this “guidance”?