WM 85: Review: The Epistles of Ignatius of Antioch 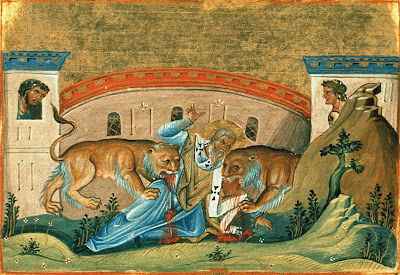 Image: Depiction of the martyrdom of Ignatius of Antioch in Rome

The Letters of Ignatius of Antioch:

Note: This Ignatius is not to be confused with the much later Ignatius of Loyola (1495-1556), the Spanish priest who was the founder of the Jesuits (in 1534).

Ignatius was the bishop of Syrian Antioch, the same city where Paul and Barnabas had ministered (see Acts 10:19-26; 15:1-2). The dates for his life are c. 35-c. 107). This places Ignatius very close to the age of the apostles. In his letters he also refers to himself as Theophorus (or God-bearer).

We have a collection of seven of his letters (six to churches, one to his fellow bishop Polycarp of Smyrna). Some have suggested that the earliest collection of Paul’s letters or, at the last, the first section of Paul’s letters, consisted of letters to seven churches or groups of churches. Consider also the letters of the seven churches of Asia Minor in Revelation chapters 2-3.

According to Eusebius, Ignatius was condemned to death and sent to Rome under the rule of the Emperor Trajan (AD 98-117). As he is transported across Asia Minor under the guard of ten soldiers he is visited by delegations from various churches and writes seven letters. He wrote four letters from Smyrna (Ephesians, Magnesians, Trallians, Romans) and three from Troas (Philadelphians, Smyrnaeans, and to Polycarp). Tradition suggests that he eventually arrived in Rome and met his death after being exposed to wild beasts.

His letters are noteworthy for several ways in which it offers insight to Christian belief in the early post-apostolic era. Here are several key areas:

First: The emphasis on obedience to church leadership.

Ignatius makes frequent reference to three offices: bishop, clergy (presbytery), and deacons. Compare the two-fold structure of 1 Timothy 3 and Philippians 1:1. Some suggest that we see here the development of the “monarchical bishop,” which sees the bishop not as the teaching elder in a single local church but as an authoritative regional leader Ignatius urges complete submission to church leadership.

Second: The zeal for martyrdom.

In these letters we see the root of martyrdom stories and lives of the “saints.”

Tertullian, another Church Father, will later say that “the blood of the martyrs is the seed-bed for the church.”

This includes conflict with Docetism and Judaizers.

Fourth: The development of other church traditions and doctrines.

This includes developing views on the Eucharist or communion.

It has been said: “The Church Fathers should really be called the Church Infants.”

Spurgeon is said to have quipped: “I love the Fathers, but I love more the Grandfathers.”

In the opening greeting he reflects Pauline emphasis on predestination and election, describing the Ephesians as “marked out since the beginning of time” and “owing its unity and election” to God.

He notes that the bishops “represent the mind of Christ” (par. 3).

He urges the Ephesians to “show no disloyalty to the bishop” (par. 5).

He stresses orthodox Christology, noting that Jesus is “God and man in one agreed” (par. 7).

He commends the Ephesians for being “deaf as stones” to false teachers (par. 9).

He can speak of the cross as that “which so greatly offends the unbelievers” (par. 18).

He speaks of “Mary’s virginity being hidden from the prince of the world, so was her child-bearing, and so was the death of the Lord” (par. 19). Does this reflect a theology of the incarnation “hoodwinking the devil” (see Louth’s note 16, p. 68).

He speaks of the breaking of bread as “the medicine of immortality” (par. 20).

He exhorts, “Let the bishop preside in the place of God, and his clergy [presbyteroi] in the place of the Apostolic conclave, and let my special friends the deacons be entrusted with the service of Jesus Christ” (par. 6).

He exhorts the Magnesians, “so you yourselves must never act independently of your bishop and clergy [presbytery]. On no account persuade yourselves that it is right and proper to follow your own private judgment” (par. 7).

On Judaizers, he notes how “adherents of ancient customs have since obtained a new hope; so that they give up keeping the sabbath, and now order their lives by the Lord’s Day instead” (par. 9).

Further on Judaizers: “To profess Jesus Christ while continuing to follow Jewish customs is an absurdity. The Christian faith does not look to Judaism but Judaism looks to Christianity” (p. 73). Footnote 8 indicates that this is the earliest use of the term “Christianity” (cf. Ignatius Romans, par. 3 and Philadelphians, par. 6).

He exhorts: “Be as submissive to the bishop and to one another as Jesus Christ was to his Father, and as the Apostles were to Christ” (par. 13).

He commends them for obedience to their bishop and urges they be “no less submissive to your clergy [presbytery], and regard them as apostles of Jesus Christ in our Hope” (par. 2).

He suggests, “without these three orders [bishops, elders, deacons] no church has any right to the name” (par. 3).

He uses a gastronomic analogy to warn against false teaching, urging the Trallians to be nourished only “on Christian fare, and have no truck with the alien herbs of heresy,” warning against men who “mingle poison with Jesus Christ” (par. 6).

He summarizes the preaching of Christ (par. 9).

He warns against docetics who teach, “that His sufferings were not genunine” (par. 10).

Returning to his gastronomic analogy, he warns, “they are poisonous growths with deadly fruit, and one taste of it is a speedy fatality” (par. 11).

Note: This letter does not include exhortations on obedience to bishops and warnings against heresy. It focuses instead on Ignatius’ impending martyrdom and might be called a “martyrs’ manual” (p. 84).

He urges the Romans not to intervene to save his life: “suffer me to a libation poured out to God” (par. 2).

He notes, “Christianity lies in achieving greatness in the face of a world’s hatred” (par. 3).

He expresses his zeal for martyrdom: “I am truly in earnest about dying for God.” He asks to be left to become “a meal for the beasts,” noting, “I am his wheat ground fine by lion’s teeth to be made purest bread for Christ” (par. 4).

He acknowledges he cannot issue orders as an apostle, like Peter or Paul (par. 4).

He says, “these chains are schooling me to have done with earthly desires” (par. 4).

More zeal for martyrdom: “How I look forward to the real lions that have been got ready for me!” (par. 5).

He exhorts; “Do not have Jesus Christ on your lips and the world in your heart” (par. 7).

5.    Ignatius to the Philadelphians:

He urges, “that you hold aloof from all disunion and misguided teaching” and “where your bishop is, there follow him like a sheep” (par. 2).

And: “Have nothing to do with “poisonous weeds.” “Every man who belongs to God and Jesus Christ stands by his bishop.” The “adherents of a schismatic can never inherit the kingdom of God” (par. 3).

He urges observance of “one common Eucharist” under “one bishop,” with elders, and deacons (par. 4).

He argues against those who “propound Judaism to you, do not listen to him.” Those who fail to preach Christ are “no more than tombstones and graves of the dead” (par. 6).

He exhorts: “Be loyal to your bishop, and clergy [presbytery], and deacons” (par. 7).

He refers to those who seek out “the ancient records” [autographic copies of the Scriptures?], but says, his records are Jesus Christ (par. 8).

He refers to a deacon named Philo who preaches God’s word (par. 11).

He provides a summary of teaching on Christ noting “his manhood, yet Son of God” (par. 1).

Contra docetism, he says, “His Passion was no unreal illusion, as some sceptics who are all unreality themselves [might say] (par. 2).

He declares, “For my part, I know and believe that He was in actual human flesh, even after His resurrection.” He urges avoidance of false teachers. At most, say a prayer for them. If everything is an illusion, he notes, “then these chains of mine must be illusory too!” More zeal for martyrdom: “when I am close to the sword, I am close to God, and when I am surrounded by lions, I am surrounded by God” (par. 3).

He describes those who absent themselves from the Eucharist and public prayers (cf. Hebrews 10:24-25), saying they do so, “because they will not admit that the Eucharist is the self-same body of our Saviour Jesus Christ which suffered for our sins, and which the Father in His goodness afterwards raised up again” (par. 7). Is this an early evidence of transubstantiation or “real presence”? Or, is it more related to refutation of docetism? Heretics deny Jesus came in the flesh.

He exhorts; “Abjure factions” and “follow your bishop.” Noting is to be done “with the bishop’s sanction.” There should be a sole Eucharist under his direction. He notes, “Where the bishop is to be seen, there let all his people be.” No baptisms or love-feasts are to be observed “without the bishop” (par. 8).

The one who honors the bishop is honored by God, “but to go behind the bishop’s back is to be the servant of the devil” (par. 9).

His advice the younger Polycarp:

“press on more strenuously in your course” (par. 1).

“bring the troublesome ones into order, by using gentleness” (par. 2).

“Stand your ground with firmness, like an anvil under the hammer” (par. 3).

“Hold services more frequently and hunt up everyone by name” (par. 4).

To the Smyrnaeans, “Pay careful regard to your bishop.” He makes use of the whole armor analogy (par. 6; cf. Ephesians 6).

First: We can see in Ignatius continuity with apostolic theology in his focus on the death and resurrection of Jesus and in his affirmation of a God-centered view of salvation and election (see the opening to his letter to the Ephesians).

Second: On church office: We see Ignatius’ emphasis on a threefold office: bishops, elders, and deacons. Is this, however, the “monarchical” bishop, or does it reflect the two roles within the one office of elder (teaching and ruling elders)?

Third: Ignatius affirms a cessationist view. He sees a clear distinction between himself and the apostles. There is no mention of the continuing office of prophet or apostles. He sees the officers as performing ordinary duties of teaching and ruling, rather than exercising extra-ordinary duties.