Calvin, the Regulative Principle of Worship, and Violence against Christ 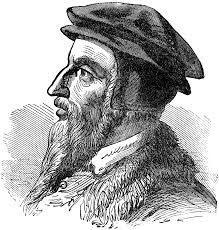 I’m reading Calvin’s commentary on the Fourth Gospel as I preach through John. I find it interesting how often Calvin steers the conversation toward the Regulative Principle of worship, even from passages where such applications do not exactly appear evident.

During preparation for last week’s sermon on John 6:15-27, I ran across another example of this in Calvin’s commentary on John 6:15: “When Jesus therefore perceived that they would come and take him by force, to make him a king, he departed again into a mountain himself alone.”

In his analysis, Calvin quickly makes a beeline to worship. Of the men who try to make Jesus a king by force, Calvin notes:

Hence let us learn how dangerous it is, in the things of God, to neglect His word, and to contrive anything of our own opinion; for there is nothing which the foolish subtlety of our understanding does not corrupt. And what avails the pretense of zeal, when by disorderly worship we offer a greater insult to God than if a person were expressly and deliberately to make an attack on his glory?

Modes of worship regulated according to our own fancy, and honours rashly contrived by men, have no other advantage than this, that they rob God of his true honour, and pour upon him nothing but reproach.

He compares worship not regulated by Scripture to an act of violence against Christ:

And, indeed, they who venture to offer to God honours invented by themselves are chargeable with using some sort of force and violence towards him; for obedience is the foundation of true worship.

Thus, whenever we mix up our own opinions with the word of God, faith degenerates into frivolous conjectures…. they rush violently against God, who is never worshipped aright but when we receive him as he presents himself to us.

When we think about the Reformation, we often speak first about the reclamation of the doctrine of justification by faith. These sorts of comments remind us, however, how central the reformation of worship was to Reformation leaders like Calvin.

Great article Jeff. Just wondering what your personal stance is on RPW? specifically matters related to psalmody and holy days. I know some consider the content of what is sung in worship is circumstantial while others believe it is an element of worship. I've been wrestling with this for some time and would be interseted on your take? God bless.

David, thanks for your comment. Like you, it sounds, I have long contemplated how the RPW should be rightly understood and applied. With regard to Psalms, I consider myself an "inclusive psalmodist" in that I think we should sing Psalms. So, we sing Psalms in each worship service at CRBC, usually from the Trinity Psalter. I also like to sing other songs with Scriptural lyrics, and we also sing some uninspired hymns. As for exclusive psalmody, I am "almost persuaded."

As for holy days, we stick to the Lord's Day as the only holy day, so we do not, for example, make much of Christmas, though we do not ignore the fact that it is a national holiday and cultural celebration. We have no Christmas decorations in the meeting space and did not have any "advent" events. On Sunday December 24 I continued my standing sermon series from John in the am service and the confession in the pm (on Radical Depravity, no less). Still, I made some references to the day, since it is obviously on folk's minds. On our midweek meeting on December 20 we did sing carols and hosted a holiday fellowship in a retirement center (see pictures on the blog). On an indvidual level, I see the personal celebration of these non-Biblical holidays as a matter of individual Christian liberty. I try, however, to keep our Lord's Day services uncluttered, so as to allow persons with different convictions to have worship and fellowship without distraction, and, most importantly, to offer faithful worship to God.