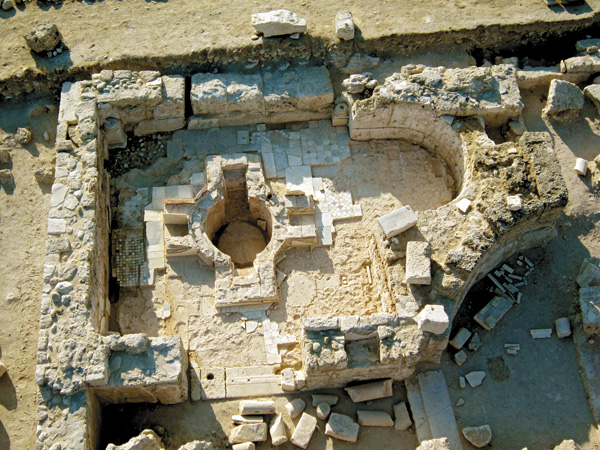 Image: Remains of a cross-shaped baptistery in ancient Laodicea, in modern day Turkey.

This is an occasional series of readings from and brief notes and commentary upon Eusebius of Caesarea’s The Ecclesiastical History: Book 7, chapters 7-9. Listen here.

These chapters continue to report on the letters of Dionysius of Alexandria to various persons regarding the baptism controversy. Dionysius sided with Stephen in opposition to Cyprian of Carthage and his argument that the lapsed must be re-baptized.

Chapter 7 describes the third letter of Dionysius On Baptism to Philemon, a presbyter of Rome. In it he claims to have received a vision which affirmed the propriety of his reading the works of heretics so that he might be able to understand and refute them.

He claims that in his practice he was following “the rule and pattern” of Heraclas of Alexandria, called here papa or “pope”, who did not require those who had drifted into false teaching to be re-baptized when restored.

He also notes that the African practice extended back to previous bishops.

He next cites the fourth letter of Dionysius On Baptism directed to Dionysius of Rome, at this time a presbyter but later the bishop.

Chapter 8 continues to describe this fourth letter as dealing with Novatian, whom he says falsely accused “our most compassionate Lord Jesus Christ of being without mercy.”

Chapter 9 describes a fifth letter of Dionysius to Xystus, bishop of Rome. Here he describes a brother in Alexandria who had received a disorderly baptism at the hands of heretics and with a tender conscience desired rebaptism, but this was refused by Dionysius.

Beyond these letters of Dionysius, two others are mentioned, a second to Xystus and the church at Rome, and another to Dionysius of Rome.

These chapters expand upon the (re)baptism controversy and Dionysius’s role as an advocate through his letters in opposition to the position of Cyprian of Carthage and others who were promoting the necessity of baptism for the lapsed. He appeals to the leaders of the Roman church, noting, in particular his agreement with Heraclas of Alexandria.