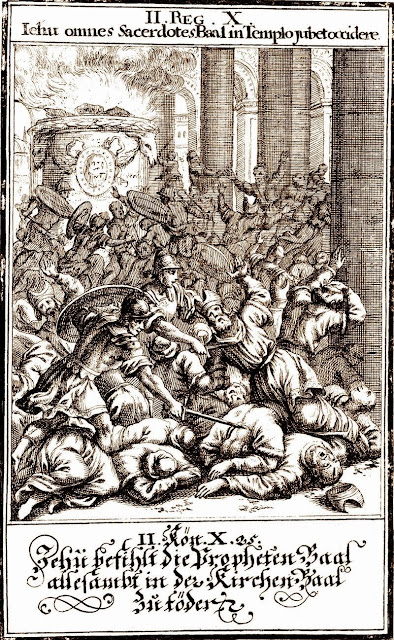 Image: Latin heading: 2 Kings 10: Jehu orders the killing of all the prophets of Baal in the temple.

2 Kings 10:31: But Jehu took no heed to walk in the law of the LORD God of Israel with all his heart: for he departed not from the sins of Jeroboam, which made Israel to sin.

John 2:17: And his disciples remembered that it was written, The zeal of thine house hath eaten me up.

2 Kings 10 continues to describe how the Lord used Jehu as an instrument of his wrath and judgement on sinful Israel and Judah. The house of Ahab and the brethren of Ahaziah were wiped out, and the prophets of Baal cut down. “Thus Jehu destroyed Baal out of Israel” (v. 28).

Still Jehu was a spiritual failure, according to the inspired historian (see v. 31). As one commentator remarked, “unlike surgeons, God has no sterilized instruments…So God uses wicked people to carry out divine designs” (Davis, 2 Kings, 163).

What spiritual lessons can we learn from 2 Kings 10?

First, the Lord will not be mocked. He will overlook wrong for a season, but in the end, he will bring about justice. He is a God of love but also of righteousness. He is a holy God, and he calls his people to be holy.

Second, God’s word will not fail. As Jehu observed, “Know now that there shall fall to the earth nothing of the word of the LORD…” (v. 10).

Fourth and finally, we can meditate on Jehu’s failure. He was the means of God’s wrath on evil doers and of Israel’s deliverance, but, in the end, he was a failure. He had zeal in some things, but compromise in others.

The mention of his zeal brings to mind the description of Christ cleansing the temple in John 2. John 2:17 says that Christ’s disciples later remembered that it was written of him: “The zeal of thine house hath eaten me up” [citing Psalm 69:90].

Jehu had a zeal, but it was an imperfect zeal, an inconsistent zeal, very much like our zeal. Christ, however, had a perfect zeal for the things of his Father.

Jehu spilled the blood of sinners. Christ, however, poured out his own blood, giving his life a ransom for many.

Jehu was an imperfect instrument of God’s wrath. Christ took the wrath of God perfectly upon himself, in order perfectly to bring many sons to glory.

Jehu was a flawed and unrighteous instrument; Christ is the perfect and righteous Son.

To him be the glory.