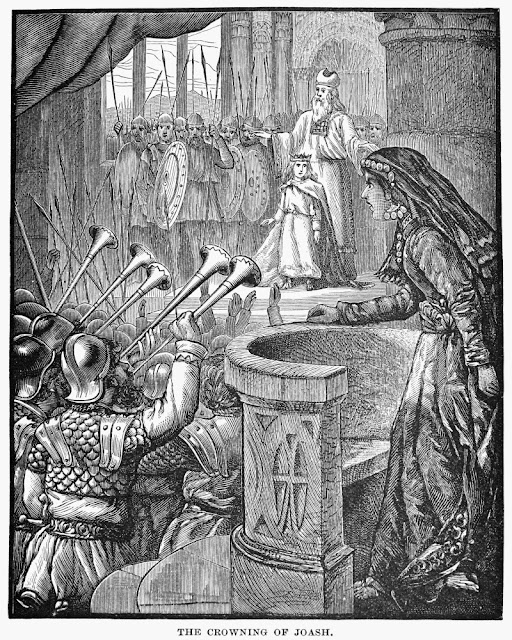 Note: Devotion based on last Sunday's sermon on 2 Kings 11.

But Jehosheba, the daughter of King Joram, sister of Ahaziah, took Joash the son of Ahaziah, and stole him from among the king’s sons which were slain; and they hid him, even him and his nurse, in the bedchamber from Athaliah, so that he was not slain (2 Kings 11:2).

And he brought forth the king's son, and put the crown upon him, and gave him the testimony; and they made him king, and anointed him; and they clapped their hands, and said, God save the king ((2 Kings 11:12).

In 2 Kings 11, the Lord preserves the line of David, despite the efforts of wicked queen Athaliah to snuff it out, thus fulfilling the Davidic covenant (2 Samuel 7), but there is, in fact, something much greater that is represented here.

What is at stake with the line of David is not just who will sit on the throne of Judah during the days of the kings, but salvation itself. Who will ultimately come from the line of David? The Messiah, the Lord Jesus Christ.

Look at the genealogy of our Lord in Matthew 1:8: “And Asa begat Josaphat; and Josaphat begat Joram [Jehoram]; and Joram begat Ozias [Uzziah].”

How do we get from Jehoram to Uzziah? We go through Ahaziah to Joash to Amaziah, and finally, to Uzziah.

The point: If there is no little Joash hidden in an inner chamber for six years and placed on the throne in the seventh year there is no Christ, and there is no salvation. The whole plan of salvation was hanging here by the slenderest of threads.

When the people shouted, “God save the King” (2 Kings 11:12), they did not know fully all they were saying. By saving Joash, the triune God was preserving the plan to bring salvation through the Messiah. Our salvation through Christ was provided in the providence of God thousands of years before we even came into existence!

Consider also the role of Jehosheba. In his commentary on 2 Kings, Dale Ralph Davis says, “Wherever antichrist is, Christ always has faithful servants.” He later calls this woman “the human agent responsible for preserving the kingdom of God in the world,” adding, if it weren’t for her “there wouldn’t be any Christmas” (173). In fact, he titles his commentary on chapter 11: “The Lady Who Saved Christmas.”

Did anyone in her times or for centuries afterward even understand what she had done? No. You might not have even heard her name until today. How many of our little girls are named for this brave woman? Precious few.

Her story reminds us that we do not know all that God is doing at any particular time in history and through the lives of his servants. Those who have the most strategic and key roles to play in the preservation of the kingdom may serve in ways that bring them little praise or recognition during their pilgrimage in this life, not only in the eyes of the world but even in the eyes of God’s people.

Our task is not to be known or recognized but to be faithful. May we be so used of God as he pleases.