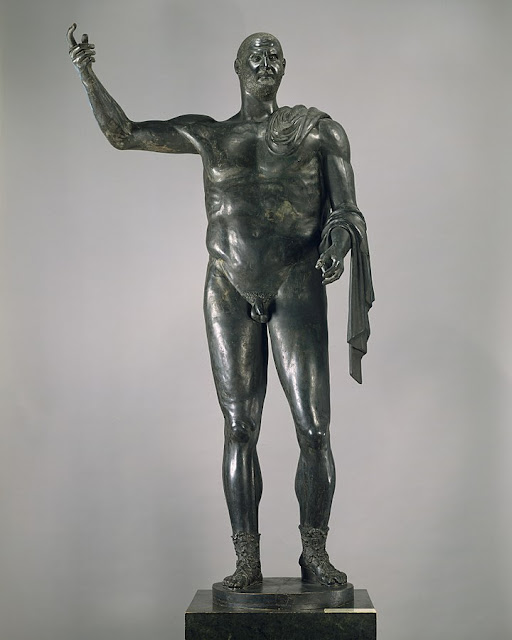 Image: Bronze statue of Trebonianus Gallus who lived from 206-253, and ruled as emperor from 251-253. Metropolitan Museum of Art, New York.

This is an occasional series of readings from and brief notes and commentary upon Eusebius of Caesarea’s The Ecclesiastical History: Book 7, chapters 1-2. Listen here.

These opening chapters describe transitions that began to take place after the Decian persecution. Book seven begins with a preface in which Eusebius tells the reader he will continue to draw the writings of Dionysius as he conveys his narrative.

Chapter one begins by describing the murder of the emperor Decius and his sons and the rise of Gallus.

It also gives a brief note on the death of Origen, who had been the focus of so much attention in Book 6. Origen is said to have died at age 69 (“seventy save one”). Oulton points out in the note that the date here is vague, since Origen apparently died later in 255, during the reign of Valerian (who ruled from 253-260).

Citing a letter of Dionysius to a certain Hermammon, Gallus is described as little better than Decius in that he rebuffed even the prayers of the Christians on his behalf.

Chapter two shifts from the emperors to the bishops. In Rome Cornelius was succeeded by Lucius, who died after only eight months in office, to be succeeded by Stephen.

It is noted that Dionysius had written the first of his letters to Stephen on baptism, in response to another controversy that arose after the Decian persecution and Novatian controversy, in that some were saying that the lapsed and those who had fallen into heresy had to be (re)baptized, while others said they could be restored only by prayer and the laying on of hands.

These brief chapters set the stage for Book 7 and its description of Christian life following the Decian persecution. How to handle the restoration of the lapsed and heretics continues to be a major problem, as the Novation controversy was followed (or accompanied by) a baptismal controversy.