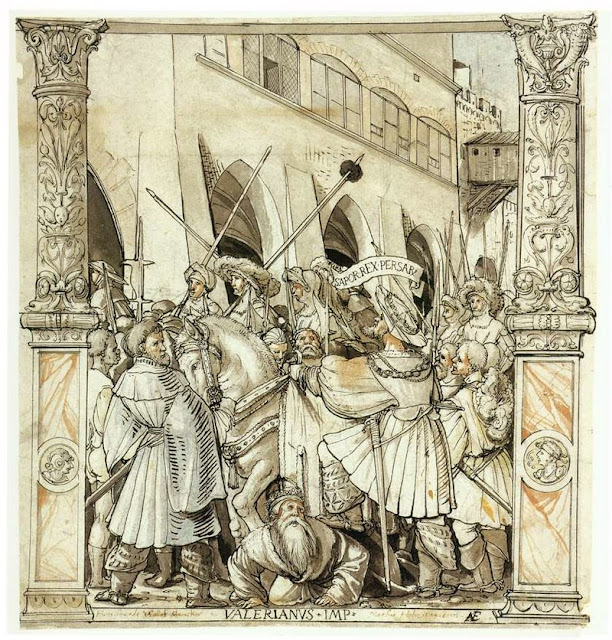 Image: The Humiliation of Valerian by Shapur I, pen and ink, Hans Holbein, the Younger, c. 1521.

This is an occasional series of readings from and brief notes and commentary upon Eusebius of Caesarea’s The Ecclesiastical History: Book 7, chapter 10. Listen here.

This chapter describes the Roman imperial transition from Gallus to Valerian.

Gallus ruled but two years before being replaced by Valerian and his son Gallienus.

A letter from Dionysius of Alexandria to Hermammon is cited in which he interprets passages from the book of Revelation as relating to this transition to Valerian.

It is noted that Valerian began as friendly to the “men of God” and that there were so many Christians in his household that it could be called “a church of God.”

This favorable disposition, however, was turned to animosity under the influence of one Valerian’s officers named Macrianus, described as “the master and ruler of the synagogue of the Egyptian magicians,” who offered unholy rites and vile sacrifices, even of children.

Macrianus manipulated Valerian to oppose Christians, moved by a “mad desire” to have his own two sons become imperial rulers, when unable “to deck his maimed body with the imperial robes.”

The historical record holds that Valerian was taken captive in battle by the Persians and lived the rest of his life as a slave in the Persian court. Eusebius interprets this as divine judgment on his persecution of Christians.

This chapter notes that some Christians had risen to positions even within the imperial house at this time, but they remained vulnerable to persecution based on the whim of the rulers. The early church was a persecuted church.