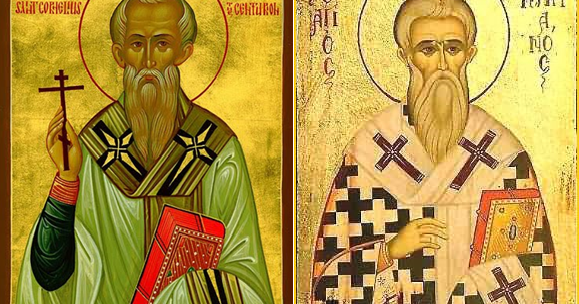 Image: Representations of Cornelius of Rome and Cyprian of Carthage, who opposed the Novatian Schism.

This is an occasional series of readings from and brief notes and commentary upon Eusebius of Caesarea’s The Ecclesiastical History: Book 6, chapters 42-44. Listen here.

These chapters address the Novatian Controversy which developed as a result of the Decian persecution.

Chapter 42 continues Dionysius’s account of the Decian persecution. This includes the gruesome description of the martyrdom of Ischyrion by impaling. It also describes those who fled to the Arabian mountains, including aged bishop Chaeremon of Nilopolis and his wife, who were never found again (and who were perhaps sold into slavery by the Saracens).

It also introduces the problem that arose when the persecution had ended as to how to treat those who had offered pagan sacrifices to escape persecution but who now repented.

Some offered leniency, admitting these as consistentes (“bystanders”, the highest order of penitents), admitting them to their prayers and feats but barring them from communion.

Chapter 43, however, describes the harsher response of Novatus [also known in Latin as Novatianus], a presbyter of Rome, who argued that there was no salvation for those who had fallen away during the persecution. This group are referred to as the “Puritans” [katharoi].

A synod was held at Rome which resulted in the expulsion of Novatus.

Eusebius next cites a letter of Cornelius bishop of Rome to Fabius of Antioch concerning the synod on Novatus and his sect. He describes Novatus as an opportunist who exercised “wolf-like friendship” in his desire to serve as a bishop. He manipulated two rural bishops irregularly and falsely to ordain him as a rival to Cornelius. It is also suggested that his conversion was instigated by Satan and he was irregularly baptized on his deathbed. It is even said that when administering communion he required the oath, “I will not return to Cornelius.” He closes by noting that Novatus had become “bare and desolate” as brethren deserted him to return to the church, though he notes that five bishops were allied with him.

Chapter 44 adds one more tale from the letter of Dionysius to Fabius, who, it is suggested, was sympathetic to Novatus, regarding an old believer who had lapsed named Serarpion. Being near death, Serapion sent his grandson for the presbyter. The presbyter sick himself and unable to come, sent the grandson with a small portion of the eucharist. The boy arrived and gave the portion to Serapion, who then died. Dionysius reports this as an example of divine preservation of the man till he could receive communion before death.

These chapter are an important witness to the Novatian controversy and how the early Christians decided to deal with those who had lapsed during the Decian persecution. It also offers an account of schism within Rome, and how this was addressed in a synod. Eusebius suggests that the church was able to maintain its unity despite these challenges and condemn the Novatian sect.