Reading Notes: Gerhard Maier's "The End of the Historical-Critical Method" 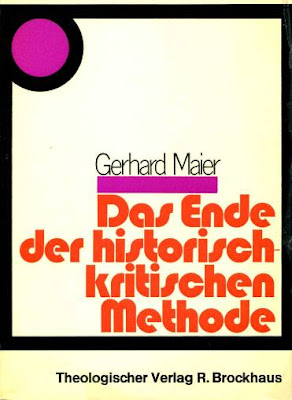 Concordia is the publishing house for the conservative Lutheran Church-Missouri Synod.

Maier (b. 1937) is a Lutheran scholar who made waves when this book first appeared offering a critique of the modern historical-critical method in which he had been trained.

Maier is also the author of Biblical Hermeneutics, trans. by Robert W. Yarbrough (Crossway, 1994). The Crossway author page still lists him as rector and professor at Tübingen. His German Wikipedia page says he was rector at the Albrecht Bengel Haus at the University of Tübingen from 1980-1995 and a Lutheran bishop in Württemberg from 2001-2005.

The End of the Historical-Critical Method is a brief book. It is a translation of the German original and suffers some of the weaknesses inherent in any effort to transfer thought from one language to another.

After a Forward by Eugene F. Klug, the book has three parts:

Part one: The inner impossibility of the concept (11-25).

This part argues that the historical-critical method fails, because it treats the Bible like any other book, and this plunges theology “into an endless chain of perplexities and endless contradictions” (11).

“The historical-critical method, in its actual application, has become an impenetrable screen which simply does not allow certain statements anymore, even though they may be proved a thousand times in the experience of believers” (11).

“The question is: Is this method (historical-critical) suitable for use with this subject matter (Bible, revelation)? (15).

Maier describes the contradictions of minister trained in the h-c method:

“Clergymen who on Mondays stood out as determined representatives of the historical-critical method at their church study groups at the same time were proud of the fact that on Sunday they had preached ‘normal’ sermons that were ‘faithful to the Scriptures’” (22).

“Accordingly the higher-critical method, as a matter of basic principle, means a procedure according to which the Bible is approached from an extra-Biblical position and with extra-Biblical standards, with the objective of discovering the Word of God in the process” (24).

The most important objection to the h-c method is that over against “divine revelation” it presents “an inconclusive and false counterpart which basically maintains human arbitrariness and its standards” (25).

Part two: The Actual End of the Historical-Critical Method (26-49):

This part begins with a survey of discussion among German scholars on the question of canon and whether there is a “canon within the canon.”

Maier warns that this discussion tends toward making the canon a matter of “subjective opinion” (35).

“Man, who began critically to analyze revelation and to discover for himself what is normative, found at the end of the road: himself” (35).

By these standards, for some, like W. Marxen, “the sermons of Augustine, Luther, or of the present are just as legitimately and normatively canonical” (35).

Even the approach taken by those like E. Käsemann who make justification the “focal point” run the risk of banishing “important lines and basic thoughts of Scripture into powerless darkness” (40).

“It is becoming more and more evident that the higher-critical method denotes a Babylonian captivity that hands the exegete over to a harmful degree of subjectivity” (40).

He cites the RC scholar Han Küng’s critique of Käsemann” “The bold program of finding a ‘canon in the canon’ demands nothing else than this: to be more Biblical than the Bible, more New Testamently than the New Testament, more evangelical than the Gospel, and more Pauline than Paul” (45).

In his summary, Maier concludes: “Thus the use of the historical-critical method has put us into a monstrous hole” (48).

It has “destroyed the certainty of faith” (49).

It has made uncertain whether or not God is actually speaking in Scripture: “With that, confidence had become impossible” (49).

The historical-critical method has “for all practical purposes” “arrived at the end of a blind alley” (49).

Part three: The Necessity of a Historical-Biblical Method:

He suggests the motto credo, ut intellegam (I believe in order to understand), rather than credo, quia intellego (I believe because I understand), adding that “right doctrine presumes right living, also on the part of the individual theologian. Without being born again, we remain as ignorant as Nicodemus” (54).

“The self-interpretation of Scripture is most profoundly connected with its goal of producing certainty” (55).

It is the “inner witness of the Holy Spirit (testimonium internum Spiritus Sancti [sic]) which indeed testified to the revelatory nature of Scripture” (57).

The hjstorical method cannot be applied as it is “generally used in historiography” (58). Scriptural interpretation “is impossible without dogmatic prejudice” (58).

“Ever since the Enlightenment the statement that Scripture contains divine revelation has prevailed and has become a leading dogma. But we have to rule it out. The true statement reads: ‘Scripture is revelation’” (63).

We may assume “there is no Scripture in the canon which is without canonical quality” (67).

Maier notes the controversy over the vowel points, and recalls a defender of their inspiration Matthias Flucas, who, he says, prophetically “anticipated that with the first break in the dam the whole dam would continue to erode” (69). JTR: Recall Owen’s defense of the vowel points.

“The more one moves away from verbal inspiration, the more one falls into theosophical speculation” (69).

Maier says that, like J. A. Bengel, discerning Bible scholars must note that “in the course of several thousand years copyist errors, gaps, variants, and different vowel signs and punctuation entered the Scriptural text. But this does not alter the fact that the Bible presents an astonishingly faithful rendition of the original text, because the variants do not change the overall context, and only seldom do they bear much weight. It does, however, place before us the task of finding the original text, and then the task of developing a methodologically appropriate concept of inspiration” (69).

JTR: Here, it seems Maier assumes the validity of the approach of modern text criticism.

Later, he notes that the “infallibility of Scripture” should not be understood in the sense of “anthropological inerrancy” (72).

He adds: “Insofar as textual difficulties are concerned , we also accept the continuation of divine guidance (providentia Dei), without indulging in the idea of progressive or unterminated revelation and without being relieved of searching for the best possible form of text” (72).

Near the end Maier presents some “Procedural Steps” for doing what he calls a “Historical-Biblical Method” as opposed to a h-c method (80-88).

These steps include (a) preliminary remarks (take notes of the insights of the h-c method); (b) finding the text; (c) translation; (d) the contemporary historical background; (e) historicoreligious comparison; (f) concerning previous literary criticism and from criticism; (g) biblical classification; the analysis.

In a paragraph on “Finding the Text” as fundamental, Maier raises some important challenges regarding modern text criticism:

“For all scholarly work with the Scriptures, the first responsibility is that of finding the text. There are literally countless variants, and the number is constantly increasing, for example, through the collecting of ancient lectionaries. The comparison of variants must be carried out critically, that is, with reasonable and intelligent standards. The term ‘textual criticism,’ to be sure, leaves room for misunderstanding, for it does not infer criticism of the text but refers to critically finding the text out of a choice that sometimes is very limited and at other times quite extensive. Nevertheless, also this task remains subject to general theological and methodological principles and is therefore clearly an aspect of theology. Methodologically speaking, the insight is important that a result must be reached from various considerations. For example, the more difficult reading (lectio difficilior), which generally is given precedence, could possibly be the result of a scribal error and therefore have little meaning. Besides this, especially the theologian should guard against falling prey to a good-manuscripts myth and therefore following in blind confidence whenever certain manuscripts provide certain readings. A third warning concerns the procedures which follow the axiom that the longer version indicates a later refinement. As a matter of fact, in later times people were not adverse to abridging, and especially the hard working copyist was more inclined to leave something out than to add to the text” (81).

In his conclusion, Maier stresses that the Biblical scholar must be aware of the “subjectivity of the proceedings.” Oddly enough he says, “Therefore we cannot compel others to accept what to us seems to be the cardinal point” (89).

He later adds: “The Biblical interpreter is just the opposite of the ‘neutral scientist’” (90).

Finally, he closes with what seems to be more Lutheran view on Christ as the “center” of Scripture: “Every interpreter arrives at a center of Scripture which brings him joy… Thus we can designate Christ as the middle of Scripture and its pivotal point, its center, its heart” (91).

Though he proceeds to defend the totality of Scripture these closing comments seem to run counter to some of his earlier comments on the dangers of a “canon within the canon” hermeneutic.