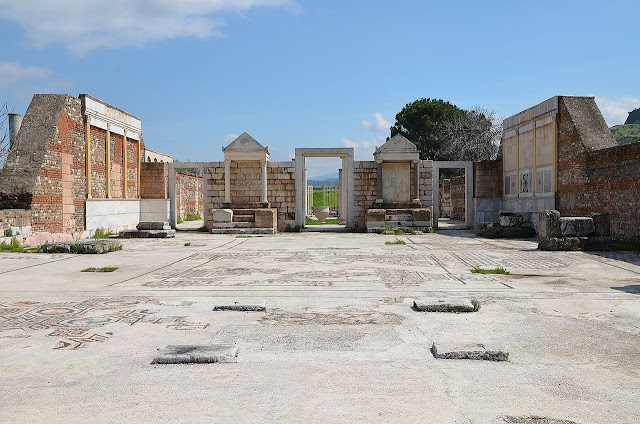 This is an occasional series of readings from and brief notes and commentary upon Eusebius of Caesarea’s The Ecclesiastical History. Here is Book 4, chapter 26. Listen here.

This chapter focuses on Melito of Sardis, though brief reference is also made at the start to Apolinarius of Hierapolis, whose work will be covered in 4.27.

It is noted that both Melito and Apolinarius wrote apologies to the Emperor (Marcus Aurelius, who ruled from 161-180).

A summary is given of Melito’s writings, the titles of which Lake notes are sometimes hard to decipher.

The works cited include:

These seems to be primary, and then there is added:

On the Faith of Man
On Creation
On the Obedience of Faith
On the Senses
On the Soul and Body (Lake notes the text is uncertain for this title)
On Baptism and Truth and Faith and Christ’s Birth (Lake says these may be chapters in the same book)
An unnamed treatise of prophesy
On Soul and Body (same title as above?)
On Hospitality
Key
On the Devil
The Apocalypse of John
On God Incarnate
And To Antoninus (To Antoninus Verus or Marcus Aurelius)

So, Melito was a prolific author. The interest in the Old Testament and Jewish practices seems to belie the fact that Melito was a Jewish Christian.

Eusebius offers a quote from the book On the Passover and notes it was cited by Clement of Alexandria.

He also gives several longer extracts from the apology to the emperor. In them Melito refers to Christianity as a “philosophy” noting that it had originated during the time of Augustus and that it was “an omen of good” to the Romans. He suggests that the Roman Empire had flourished under Augustine, because he did not persecute Christians. He says that only Nero and Domitian had persecuted believers and with them had begun the practice of falsely accusing Christians.

Eusebius also cites the preface to his six-volume work called the Extracts (Eklogai) in which he quotes a letter from Melito to a brother named Onesimus in which he provides a list of the canon of the Old Testament, as accepted by Christians. Here are the OT books as he lists them in this letter:

The Psalms of David,

The Proverbs of Solomon and his Wisdom, Ecclesiastes, the Song of Songs, Job,

The prophets Isaiah, Jeremiah, the twelve in a single book,

Some point of interest in this OT canon list:

1.  The book of Esther is not mentioned.

2.  The book of Lamentations is not mentioned, but it is likely included with Jeremiah.

3.  The book of Nehemiah is not mentioned, but it might have been included with Ezra.

4.  The ordering shows the influence of the LXX. For example:  Ruth is listed with the historical works and Chronicles is listed with Kingdoms rather than at the end with a grouping of “the writings” in the tri-partite Hebrew Bible ordering.

5.  The listing is distinctive, however, in that it does not include the apocryphal books.  The one exception could be the Wisdom of Solomon, but it might be that the phrase “The Proverbs of Solomon and his Wisdom” simply refers to the book of Proverbs.

1. This list shows that the early Christians accepted the OT as part of the Christian Scriptures, contra Marcion.

2. Melito’s OT canon excluded the apocryphal works of the LXX, showing that at least some early Christians rejected these works as canonical and, instead, received the same books as those of the Hebrew Bible.

3. Melito’s OT canon also gives evidence that there was still some apparent controversy about which books were canonical, especially with regard to the book of Esther.

Melito of Sardis was an important figure in early Christianity, another of the “writing bishops.” This description is especially valuable for the insights it provides on the early Christian view of the Old Testament.