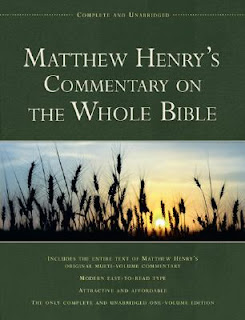 Continuing our examination of how some of the faithful “old path” men view text and translation issues in 1 Samuel 6:19 (see part 1 and part 2), we turn to Matthew Henry (1662-1714). Henry, like Poole, does not deal with the LXX expansion, though he surely knew of it. He thereby expresses his confidence in the Masoretic text of the Hebrew. He does, however, address the issue of translating the number “70 men, 50,000 men” (literal Hebrew) in the verse.
Henry’s notes reveal his awareness that the Hebrew “is expressed in a very unusual manner” and lists various possibilities while sticking with the traditional rendering:
He smote 50,070 men. This account of the numbers smitten is expressed in a very unusual manner in the original, which, besides the improbability that there should be so many guilty and so many slain, occasions many learned men to question whether we take the matter aright. In the original it is, He smote in (or among) the people three score and ten men, fifty thousand men. The Syriac and Arabic read it, five thousand and seventy men. The Chaldee reads it, seventy men of the elders, and fifty thousand of the common people. Seventy men as valuable as 50,000, so some, because they were priests. Some think the seventy men were the Beth-shemites that were slain for looking into the ark, and the 50,000 were those that were slain by the ark, in the land of the Philistines. He smote seventy men, that is, fifty out of a thousand, which was one in twenty, a half decimation; so some understand it. The Septuagint read it much as we do, he smote seventy men, and fifty thousand men. Josephus says only seventy were smitten.
Some conclusions: Modern scholars have not really uncovered anything about the text of 1 Samuel 6:19 that was not known by men of old (including Reformation era translators of the Geneva Bible and AV). There is no reason to abandon the traditional Hebrew text to accommodate LXX readings or to depart from an attempt to take literally the number of 50,070 as the best translation of the Hebrew figure for the number struck down by the Lord for “looking into the ark.”