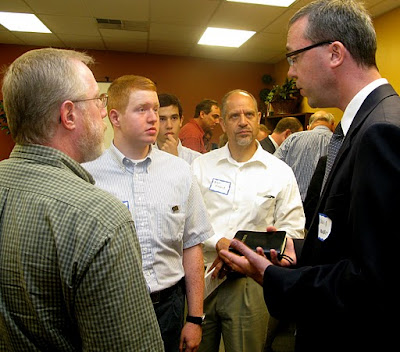 Image:  Conversation with David Murray at the 2010 Keach Conference
“Thus far the LORD has helped us” (1 Samuel 7:12)
In one of our family devotions just before New Year’s Day, we were discussing our highlights from 2010. Hannah noted that she had gotten her driver’s license, began a part-time job, and started taking college classes. We thought maybe she would win the family award for biggest accomplishments in the past year. Then, on Isaiah’s turn, we remembered that in 2010 he had both learned to how swim and how to read. That was hard to top! Everyone in our household definitely agreed that one of the chief highlights of last year was our involvement in the planting of Christ Reformed Baptist Church.
Here are a few significant CRBC milestones from last year:
January 3:  First Lord’s Day meeting at the Riddles’ home
January 10:  Moved Lord’s Day meetings to the North Garden Fire House
February 21:  Moved Lord’s Day meetings to 1410 Incarnation Drive
March 29:  Trinity hymnals donated by Lloyd Sprinkle and Providence BC
May 24:  Funeral service for Bill LaGrange
June 21-25:  First Vacation Bible School on “The Life of Daniel”
July 11:  Daniel Houseworth returns to CRBC from Afghanistan
August 8:  First baptismal service at Rivanna River with six candidates
September:  Began Tuesday morning homeschool cooperative
September 24-25:  Hosted Keach Conference with over 90 participants
September 26:  CRBC Covenant Service. CRBC particularizes with 24 members
October 29:  Reformation Weekend Trip to Tinkling Spring
November:  Nominations taken for church officers
The list above is certainly not exhaustive. In next week’s Vision, we will look forward to some prospects and goals for 2011.
Grace and peace, Pastor Jeff Riddle
Posted by Jeffrey T. Riddle at 9:47 PM

May God bless you all in this coming year. Your photo of Dr Murray gives me joy and sadness: joy seeing him; sadness that he's so far from us.
Blessings to you all, Anne