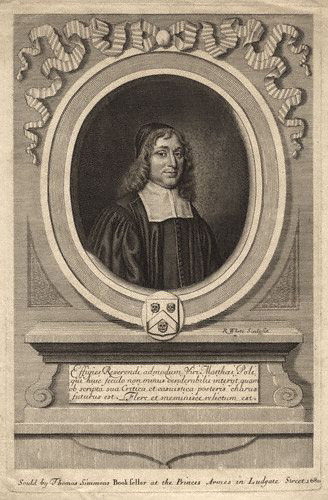 In the previous post, I noted two textual and translational difficulties with 1 Samuel 6:19: (1) an expansion in the LXX concerning “the sons of Jechoniah”; and (2) the translation of the number of men struck down by God as 50,070 (as in translations that formally follow the traditional text, such as the AV, NKJV, and NASB) or as merely 70 (as in translations that depart from the Hebrew text without explanation, such as the JB, NEB, RSV/ESV, and NIV).
Now, we turn to look at how some of the faithful “old men” dealt with these issues in their commentaries. First, we look at Matthew Poole (1624-1679). Beeke and Pederson call Poole’s work “the best basic Puritan commentary for daily Bible study” (Meet the Puritans, p. 487). First, Poole does not address the LXX expansion at all, though he was surely aware of it. This reading is not part of the traditional Hebrew text, so it is not a valid option for consideration. As to the second issue, Poole offers an exceptionally extended reflection on this difficulty in which he provides a reasonable defense of the traditional reading (of both the text and translation) and an awareness of challenges that have been offered against it:
Fifty thousand and threescore and ten men: This may seem an incredible relation, both because that place could not afford so great a number, and because it seems an act of great rigour, that God should no severely punish those people who came with so much zeal and joy to congratulate the return of the ark, and that for so inconsiderable an error. For the latter branch of the objection, it may be said,
(1) That God always used to be most severe in punishing his own people, as sinning against more knowledge and warning than others; especially for such sins as immediately concern his own worship and service.
(2) That men are very incompetent judges of these matters, because they do not understand all the reasons and causes of God’s judgments. For although God took this just occasion to punish them for that crime which was so severely forbidden even to the common Levites under pain of death; of which see Numb iv.18-20; yet it is apparent that the people were at this time guilty of many other and greater miscarriages, for which God might justly inflict the present punishment upon them; and moreover, there are many secret sins which escape man’s observation, but are seen by God, before whom many persons may be deeply guilty, whom some men esteem innocent and virtuous. And therefore men should take heed of censuring the judgments of God, of which it is most truly said, that they are oft secret, but never unrighteous.
And for the former branch of the objection, many things are or may be said:
(1) That the land of Israel was strangely populous. See 2 Sam xxiv.9; 2 Chron xiii.3.
(2) That all these were not the settled inhabitants of this place, but most of them such as did, and in all probability would, resort thither in great numbers upon so illustrious an occasion.
(3) That all these were not struck dead in the very fact, and upon the place, which would have terrified others from following their example; but were secretly struck with some disease or plague, which killed them in a little time.
(4) That divers learned men translate and understand the placed otherwise, and make the number much smaller. Josephus the Jew and the Hebrew doctors, and many others, contend that only seventy persons were slain; which though it seem but a small number, yet might justly be called a great slaughter, either for the quality of the persons slain or for the greatness and extraordinariness of the stroke; or because it was a great number, considering the smallness of the place, and the sadness of the occasion. The words in the Hebrew are these, and thus placed, he smote of or among the people seventy men, fifty thousand men; whereas say they, the words should have been otherwise placed, and the greater number put before the less, if this had been meant, that he smote fifty thousand and seventy men. And one very learned man renders the words thus, He smote of the people seventy men, even fifty of a thousand, the particle mem, of, or out of, being understood, as it is very frequently. So the meaning is, that God smote every twentieth man of the transgressors, as the Romans used to cut off every tenth man in case of the general guilt of an army. Or the words may be rendered thus, He smote of or among the people seventy men out of fifty thousand men; the particle mem, of, or, out of, being understood before the word fifty, which Bochart puts before a thousand; and it may be thus expressed, to show that God did temper his severity with great clemency; and whereas there were thousands of transgressors (every one following his brother’s example, as is usual in such cases,) God only singled out seventy of the principle offenders, who either sinned most against their light or office, or were the ringleaders or chief encouragers of the rest. To which may be added, that the ancient translators, the Syriac and the Arabic, read the place five thousand and seventy men, being supposed to have read in their Hebrew copies chamesh, five, for chamishim, fifty, which is no great alteration in the word.
JTR
Posted by Jeffrey T. Riddle at 12:58 PM