WM 151: Review: McDonald on Erasmus, the CJ, Foucault, and "Epistemes" 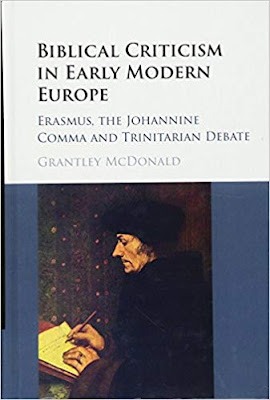 WM 151: Review: McDonald on Erasmus, the CJ, Foucault, and “Epistemes” has been posted. Listen here.

This episode is a reading of a draft of my review of:

Here is the closing analysis:

This work represents a significant contribution to the reception history of the Johannine Comma from Erasmus to the present. Any future study of this controversial New Testament passage will need to consult, benefit from, and make reference to this work.  This reviewer is especially appreciative of McDonald’s debunking of the Erasmian “myths” that have developed relating to his inclusion of the comma in the third edition of the Dutch scholar’s Greek New Testament, as well those relating to the history and influence of Codex Montfortianus.

One of the most intriguing ideas put forward by McDonald in this study is his analysis and application of Michael Foucault’s concept of the “episteme” to understand the division that has resulted over the acceptance of the comma. An “episteme” is defined as “an internally consistent mode of conceiving the world that determines which questions may conceivably be asked, and thus judged to be either true or false” (146). In what he calls “the premodern episteme” critical thought was “subordinated to a theological a priori” (146). This meant, for example, “it was almost inconceivable to doubt the inspiration of Scripture” (146). With the development of the historical-critical method, beginning with Richard Simon and Baruch Spinoza, critical questions were disconnected from theological ones. Though McDonald does not use this term, we might call it the “modern episteme.” Rather than one episteme neatly yielding sequentially to the next, as Foucault envisioned it, McDonald suggests that “the episteme that existed before Spinoza and Simon never ended. Rather their work fractured the hermeneutical consensus, leading to a situation in which two epistemes came to exist in parallel” (147). McDonald describes these two parallel epistemes as follows:

One maintains an essentially premodern attitude towards Scripture, submitting judgement in textual matters to the ultimate criterion of doctrine, while the other has accepted, internalized and built upon the insights of Spinoza and Simon, using the tools of philology, history and sociology to illuminate the beginnings of Christianity (147).

He concludes, “I suggest that many of the conflicts between academic liberal critics and conservative apologists arise out of a basic epistemological incompatibility” (147). It is this fundamental “epistemological incompatibility” that compels disagreement over the Johannine Comma as those who hold the “premodern episteme” continue to a affirm it, while those who hold the “modern episteme” continue to reject it.

According to McDonald then, the reception of the comma represents a proverbial “fork in the road.” As he puts it, “One path was followed by those who insisted on the providential preservation of Scripture. The other was taken by those who believe that Scripture, whatever its source, is subject to the same process of transmission as any other text” (12). The story that results is one of “constantly competing claims, in which outcomes are rarely clear and motives are often obscure” (12).

McDonald is hardly sympathetic to those who continue to uphold the comma against the modern scholarly “consensus”, held since the mid-twentieth century, that the “three heavenly witnesses” passage is a spurious and late “interpolation” (9).  He associates renewed debate over the comma to the “revival of the Christian right,” conspiracy theories, and internet discussions, where it has become a “hot-button issue” (9). McDonald suggests, “As a result of an informational cascade amongst non-scholarly believers, the divide between academic consensus and lay conviction is growing” (9). What McDonald does not explicitly seem to acknowledge is that he is hardly a neutral observer. He holds, in fact, to the “modern episteme,” which he so helpfully describes. Nevertheless, McDonald is to be thanked not only for his historical review of the various clashes over the comma, but also for his insights on the epistemological divide over this matter. To paraphrase the poet Robert Frost, when we come to the comma as a fork in the road, the path we take does indeed make all the difference.

Here is a link J. C. Ryle’s Expository Thoughts on the Gospel of John with Notes

Once you have clicked on the link, click on the pdf link for the preface and you'll find a very edifying read of JC Ryle's position on the inspiration of scripture and on translations and variants.

Excerpt from the preface - "The vexed question of “various readings,” I have deliberately left alone. It is not

because I have no opinion on the subject. But the real extent to which all the various
readings would affect the meaning of Scripture, if they were admitted, is so much ex-
aggerated, that it does not seem to me worth while to mix up the question with such a
work as that which I have undertaken. The Greek text which I have been content to
use throughout is that of the third Edition of Stephens (1550), edited by Scholefield. I
do not say for a moment that it is the best text. I only say I have used it.
The occasional shortcomings of our authorised English translation I have not
hesitated to notice. I have frequently pointed out expressions which in my judgment
are not rendered so literally or accurately as they might have been There is nothing
perfect on earth. Our excellent translators undoubtedly fail occasionally to give the
full sense of Greek words, and are not always sufficiently careful about tenses and the
article. But it is useless to expect perfection in any translation. Translators are not in-
spired, and are all liable to err. The “plenary verbal inspiration” which I firmly main-
tain, is that of the original text of Scripture, and not of any translation.—I have no
sympathy however with those who wish to have a new authorised English version of
the Bible. I concede the shortcomings of the old version, but judging by the specimens
of “new and improved” versions which I have seen, I doubt much whether we should
gain anything by attempting to mend it. Taking it for all in all, the authorised English
version is an admirable translation. I am quite content to “let well alone.”
I now conclude this preface with an earnest prayer, that it may please God to par-
don the many deficiencies of this volume, and to use it for His own glory and the
good of souls. It has cost me a large amount of time and thought and labour. But if the
Holy Ghost shall make it useful to the Church of Christ, I shall feel abundantly repaid.
Ignorance of Scripture is the root of every error in religion, and the source of
every heresy. To be allowed to remove a few grains of ignorance, and to throw a few
rays of light on God’s precious Word is, in my opinion, the greatest honour that can
be put on a Christian.
J. C. RYLE, B. A.,
CHRIST CHURCH, OXFORD.
Stradbroke Vicarage, Suffolk,
February, 1865."

Thanks for this indication, I started to think about textual issues several years ago after I read Metzger's comments concerning the comma in Lee Strobel's work, "The case for Christ". Thinking about the genuineness of the comma led me to defense of the Traditional Text. So, McDonald's book is a good addition into the debate about that precious verse.

Jeffrey Riddle
Greetings, Jeffrey, would like to examine two points:

"With the development of the historical-critical method, beginning with Richard Simon and Baruch Spinoza, critical questions were disconnected from theological ones."

The Gospel of John in the Sixteenth Century:
The Johannine Exegesis of Wolfgang Musculus (1997)
Craig S. Farmer
https://books.google.com/books?id=USfPqoCykKAC&pg=PA109

"Although Cajetan defended himself against the charge of Protestant sympathies, there is no escaping the decidedly humanist character of his commentaries.4 He believed that the Protestant heresies could be effectively battled only when Catholic theology rooted itself firmly in the historical-grammatical meaning of Scripture."

Other than the volume of writing, is there really any significant difference between Cajetan and Richard Simon, 150 years later? He also gave the same type of concerns about the Mark ending and the woman caught in adultery and the heavenly witnesses.

And should Erasmus be considered in this group as well?
hmmm

"In the 17th and 18th centuries the method was further developed in the work of the Dutch jurist and theologian Hugo Grotius, the French Oratorian and biblical scholar Richard Simon, and the Dutch philosopher Baruch Spinoza—thus in the work of a Protestant, a Catholic, and a Jew."

Personally, I do not accept the distinctions as given by Grantley, he would like all the (good-guy) philologists to be opposed to the heavenly witnesses, and the Bible-believers, "theologians" being those who affirm the verse. Then he dances around to fit the square peg into the round hole.

"the modern scholarly “consensus”, held since the mid-twentieth century"

Probably more accurate to say late 19th century, although there were a number of truly superb defenses of the authenticity of the heavenly witnesses up till around 1890. (Abbe le Hir, Charles Forster, Henry Thomas Armstrong and others.) Then there was mostly a gap until Edward Freer Hills, and then another gap until the work of Michael Maynard became a major spur to the superb research of the last 25 years.

Thanks for the review, and the recently more completed one!