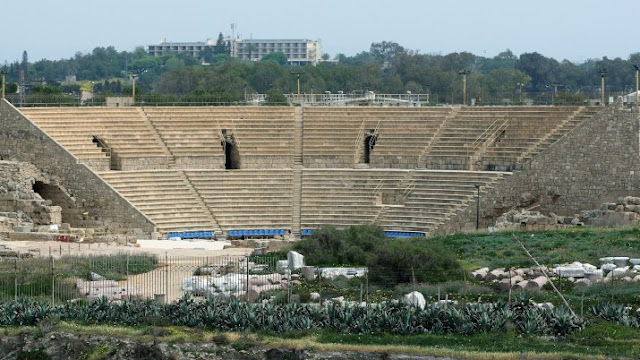 Image: Modern view of the Roman amphitheater in Caesarea

This is an occasional series of readings from and brief notes and commentary upon Eusebius of Caesarea’s The Ecclesiastical History: Book 6, chapters 26-32. Listen here.

These chapters continue to describe the life of Origen, focusing especially on his transition from Alexandria to Caesarea, noting various significant persons, places, and events of the times.

Chapter 26 describes Origen’s transition from Alexandria to Caesarea c. AD 232. He was succeeded as head of the Catechetical School by Heraclas, and when Demetrius died, Heraclas also became bishop of Alexandria.

Chapter 27 describes the esteem in which Origen was held by the bishops, including Firmilian of Cappadocian Caesarea, Alexander of Jerusalem, and Theoctistus of Palestinian Caesarea.

Chapter 28 turns to the Roman imperial succession. Alexander was succeeded by Maximin [Maximinus] Caesar. Maximin lead a persecution against Christians, many of whom were in the household of Alexander, and he ordered leaders of the church to be put to death. Among those who suffered in this persecution were Ambrose of Alexandria and Prototectus of Caesarea. At this time Origen wrote On Martydom and described the persecution in his exposition on the Gospel of John.

Chapter 29 begins by noting that Gordian succeeded Maximin as emperor.

In the church at Rome, meanwhile, Pontianus was succeeded by Anteros. When Anteros died a month later, he was succeeded by Fabian, whose appointment to the office came after a dove mysteriously flew down upon his head, a sign of the descent of the Holy Spirit, as when Christ was baptized.

Chapter 30 describes the students, local and foreign, who flocked to Origen at Caesarea. They included two brothers: Theodore (later known as Gregory Thaumaturgus, or the “Wonder Worker”) and Athenodore. Origen taught them for five years and lead them from a love of secular philosophy to a love of divine truth, and both became bishops as young men.

He is said to have written to Origen and been answered by him regarding the authenticity of the story of Susanna, an apocyryphal addition to Daniel.

He also wrote the Chronographies.

He is said to have traveled to Alexandria on hearing of the fame of Heraclas.

Eusebius notes that another of his letters to Aristides is extant in which he offered a harmony of the genealogies in Matthew and Luke, and to which Eusebius had referred earlier in the EH.

Chapter 32 describes Origen’s commentaries on Isaiah, Ezekiel (a work completed while Origen visited Athens), and the Song of Songs (begin in Athens and finished in Caesarea).

Eusebius notes that in his life of his mentor Pamphilius he had described Pamphilius’s great library and his list of the works of Origen and other church writers. He says he has no need to list Origen’s complete works here, since it appeared in the other work.

These chapters continue the life of Origen, noting how in his transition from Alexandria to Caesarea his influence was not lessened, as he continued to teach, write, and exert his influence upon many.