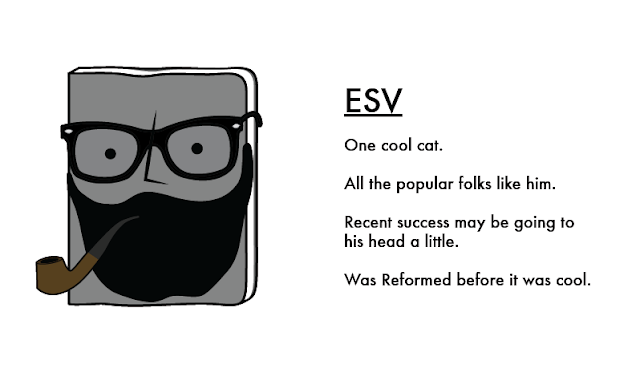 My friend Christian McShaffrey, Pastor of Five Solas OPC in Reedsburg, Wisconsin and host of the upcoming "Kept Pure in All Ages" conference, has written an on-point article titled, "What, are you ESV-Only?". Pastor McShaffrey makes some great points in this article. Give it a read.

When I read this, it stood out to me that he is basically endorsing Scrivener's edition when he says,

"Group #3: 'Textus Receptus Only' – This group believes that the underlying Greek text of the KJV has been supernaturally (note: I would use the word 'providentially') preserved over time."

I find this most unfortunate.

JW's position, as I understand it, and as stated in the Wikipedia article about the KJV Only Movement, says,

"'Textus Receptus Only'/'Received Text Only – This group holds the position that the traditional Greek texts represented in the Textus Receptus were supernaturally (or providentially) preserved and that other Greek manuscripts not used in this compilation may be flawed."

This is NOT a description of Scrivener's edition.

There are, it seems to me, far too many people in this movement who believe Scrivener is the authoritative edition, which is essentially saying the KJV translators alone were guided to compile the Received Text of the Greek New Testament.

“Stephen’s edition of 1550 and that of the Elzevir’s [1624] have been taken as the standard or Received text, the former chiefly in England, the later on the continent…”

F. H. A. Scrivener, “A plain introduction to the criticism of the New Testament for the use of Biblical students” (p. 442)

Perhaps I'm being too nitpicky but I've seen too many comments, polls, and posts in the Text and Canon Facebook Group that demonstrate to me that far too many people have adopted a KJV/Scrivener Only position, which cannot be seriously defended. Scrivener is what it is, and it was not the Received Greek Text that was overthrown by the modern critical text.

I think you may be reading too much into the Greek text behind the KJV. That is the TR. I don't think he was referring to something like Scrivener, but the TR family as a whole as opposed to the Critical Text.