Eusebius, EH.6.39-40: The Decian Persecution and the Sufferings of Origen and Dionysius 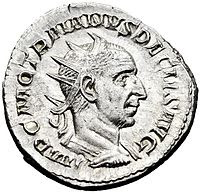 This is an occasional series of readings from and brief notes and commentary upon Eusebius of Caesarea’s The Ecclesiastical History: Book 6, chapters 39-40. Look here.

These chapters describe the Decian persecution and the sufferings endured by men like Origen and Dionysius during this time.

Chapter 39 describes the rise of the emperor Decius (c. 201-251; ruled 249-251) and his persecution of Christians. Eusebius says this came from Decius’s enmity toward Philip, who was either a Christian or sympathetic to them, and who had members of his household who were Christians.

Fabian became a martyr at Rome and was succeeded as bishop by Cornelius.

Alexander of Jerusalem made confession before the Roman court at Caesarea for a second time and died in prison as an elderly man, being succeeded by Mazabanes.

In Antioch, Babylas, likewise, died in prison. He was succeeded by Fabius.

Origen also fell under “special attack.” He was imprisoned, chained, and tortured, including having his feet stretched In the stocks. A reliable first hand account, says Eusebius, is available in his letters.

Chapter 40 turns to describe the persecution of Dionysius of Alexandria, a drawing from his letter against a certain Germanus.

He describes how a frumentarius (officer) was sent to search for him for four days, but, in the providence of God, he had simply remained at in his home and had not been discovered.

After these four days, Dionysius, his “boys” (sons or pupils or servants), and some of the brethren took flight. They were then arrested and taken to the town of Toposiris.

A brother named Timothy told a group at a marriage feast of the bishop’s arrest and they rushed the guards to deliver a  somewhat reluctant Dionysius from his captors.

These chapter describe the beginnings of the Decian persecution and the martyrdoms and sufferings of some the prominent leaders, including Origen, who had written about and urged martyrdom and faithfulness under persecution upon others and now experienced the same, as well as Dionysius. Rather than frustrate the movement, these persecutions seemed to embolden and encourage the early Christians, who could now look back at those who suffered as heroes of the faith.